I have a simple top down bike game that I'm trying to add steering to. I would like to know how I use the heading of the front wheel to determine the heading and velocity of the bike.

I have tried to apply the bike velocity to the front and rear wheel and use the difference of there positions to determine the bike heading, but the forward drag make it confusing. 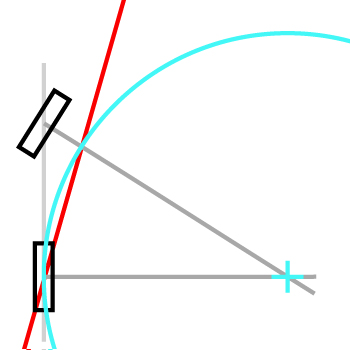 Ok, I'm back with results!

We are in the plane with basis vectors ex and ey.

We suppose that, at a certain instant t, A(t) has a velocity V(t) colinear with AB. Therefore, for an infinitesimal timestep dt,

for a certain real, positive λ such that the length of the bike L is conserved:

This last equation translates to

The solution, of course, is independent from φ since the problem is the same when the bike points towards positive y. Therefore, if we call R the rotation matrix with angle -φ, λ must be the positive solution of

After a few calculations, if we call v the norm of V, you get

Here's the pseudocode I used to get the animation above (instead of using Uθ, I use u = U(θ+φ) because it was simpler):

If you repeat a lot and/or increase the steering angle, the trajectory is a circle, which is coherent, I believe.

Not the answer you're looking for? Browse other questions tagged physics car .

3
How to achieve realistic fake physics?
8
Differential programming for a vehicle
1
How do I interpolate air drag with a variable time step?
1
Lunar lander: How to calc acceleration in each step
1
Lunar lander: why is my descent module crashing
1
Simple 2D vehicle physics - maintaining vehicle length
3
How to completely stop the camera from clipping into the ground
0
Problem with calculating velocity for a car with multiple gear ratios
0
How to calculate accelation times and vector to orient a pointmass to a new orientation