How does braking assist of car racing games work?

There are a lot of PC car racing games around which have this unique driving assist which helps brake your car so that you can safely turn it. While in some games it just an 'assist', it will just help your car brake but won't ensure a safe turn. While in others, the braking assist will help you get a safe turn. I was wondering on what could be the algorithm that is followed to achieve it.

A very basic algorithm I could think of was,

A more advanced algorithm, which would ensure a safe turn, could be

Fundamentally, braking assist works comparing the player's car's speed against the speed of the nearest point on the track's optimal racing line, and automatically applying the brakes as needed to bring the player's car's velocity down to match the speed specified on the optimal racing line. It's exactly like writing racing car AI, but only applying the AI's brake outputs, not the accelerator or steering.

This does (obviously) require you to have data about an optimal racing line, so you can tell how much the player needs to slow down. This racing line is typically generated computationally during development, and is shipped with the game as a piece of static data, rather than being calculated at run-time. (I have worked on games which dynamically generated a racing line in front of the player, but this was computationally expensive, and I don't recommend it unless you have tracks that change in unpredictable ways)

You could calculate the path the car would describe if it turns with the current speed without drifting. Then apply brakes in proportion to the distant d, which is the distance measured from the calculated path to the curve. 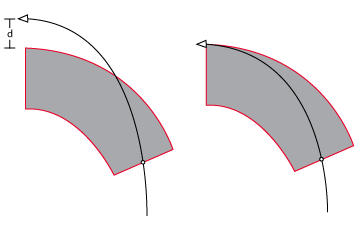 Not the answer you're looking for? Browse other questions tagged physics racing or ask your own question.

10
Tips for building an AI for a 2D racing game
3
Car movement in arcade racing game
2
Speed needed to make a car jump from a ramp
3
How to calculate distance of travel needed get achieve speed x?
0
How to calculate acceleration and deceleration
2
Math needed to create a very simple 2D side view car game
1
Let a point drive on a polyline