I'm working on a simple 2d game with direct3d 9. It's a isometric game with diamond tiles and a staggered map. This is what I have: 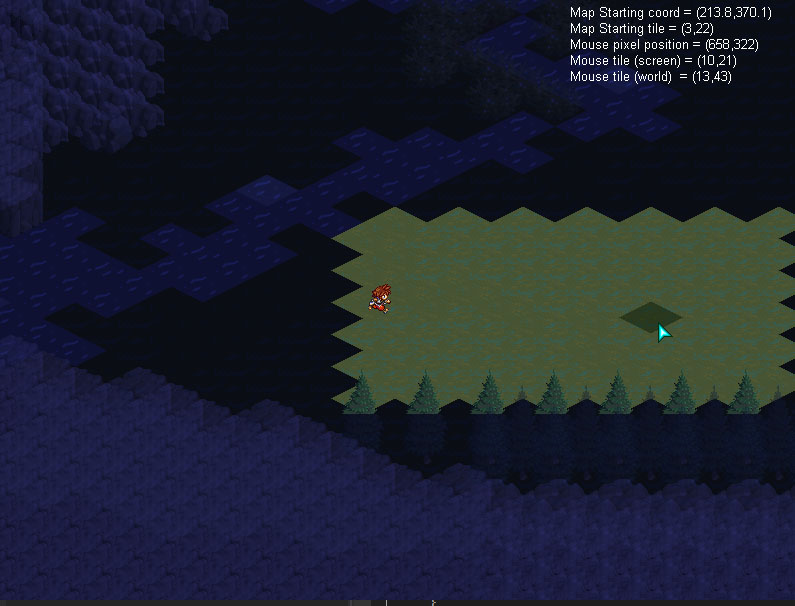 As you see I have some kind of fog which is acomplished by having a fog matrix which is true (clear terrain) or false (obscure terran). But the result is very chunky. The fog moves as the player moves by tiles but not by pixels. Basically I check for every tile if there is fog, if so I just change the color of that tile:

I also would like the fog to be smoother, for that I followed this "tutorial" but I haven't managed to work it it out becuase I think the tutorial implements a diferent kind of fog than I am.

All right, the question has become much more sophisticated, so I'll upgrade my comment to an answer.

There are lots of ways to do what you want to do. The more precise you want your lighting calculations, the more complex the program will be, so I'd advice you focus on keeping it simple, and dedicate more of your time to making the game fun instead of getting stuck with technical details.

But anyways, here are some methods I can think of to accomplish what you want:

Good luck with your game.

Here is a simple proposal: you could try modulate the fog intensity for each cell. Here is an example of applying a simple convolution filter:

Instead of storing booleans in your fog matrix, you could store floating-point values. This would represent the amount of fog on each tile, between 0 and 1. Then simply blend your color depending on the tile's amount of fog:

There are probably several ways to generate this fog matrix, but one way I can think of is:

I'm not sure that will be necessary (this is simply an artistic choice) but if you want the fog amount to change directly with the player's moves, you'll have to generate this fog matrix using directly distances from the player. E.g. if you want a simple fog circle, that's what you could do for one tile at (i,j) in your fog matrix:

That's if you want to keep a "tiled" fog. Overlaying a translucent image as suggested by Panda Pajama in his comments might be a much simpler solution, but it will give you a different result. Once again, this is an artistic choice you have to make.

Not the answer you're looking for? Browse other questions tagged 2d directx isometric directx9 or ask your own question.