Please, I need your help. I'm trying to make a game that will drag-n-drop a sprite/image while my finger follows precisely with the image without being offset. When I'm trying on a 900x1280 (in X [900] and Y [1280]) screen resolution of the Google Nexus 7 tablet, it follows precisely. However, if I try testing on a phone smaller than 900x1280, my finger and the image won't aligned properly and correctly except it still dragging. This is the code I used for making a sprite dragging with my finger under touchDragged():

This code above will make the finger and the image/sprite stays together in place while dragging but only works on 900x1280.

You'll be wondering there's camera_2.viewportHeight in my code. Here are for two reasons: to prevent inverted drag (e.g. when you swipe with your finger downwards, the sprite moves upward instead) and baseline for reading coordinate...I think.

Now when I'm adding another orthographic camera named camera_1 and changing its setting, I recently used it for adjusting the falling object by meter per pixel. Also, it seems effective independently for smartphones that has smaller resolution and this is what I used here:

But the result instead of just following the image/sprite closely to my finger, it still has a space/gap between the sprite/image and the finger. It is possibly dependent on coordinates based on the screen resolution. I'm trying to drag the blueberry sprite with my finger. My expectation did not met since I want my finger and the sprite/image (blueberry) to stay close together while dragging until I release it. Here's what it looks like: 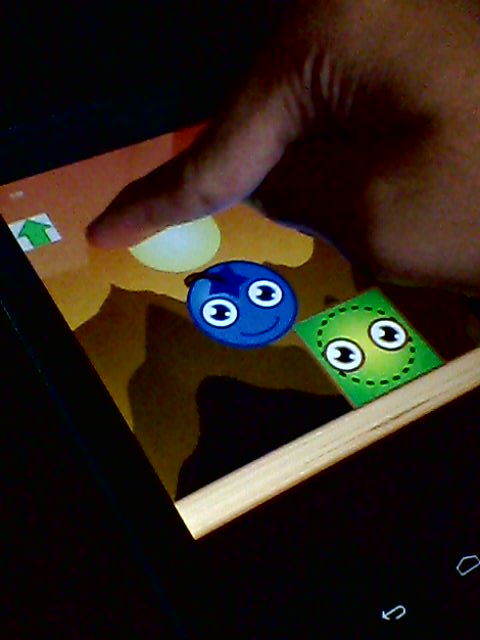 I got to figure it out how to make independent on all screen sizes by just following the image/sprite closely to my finger while dragging even on most different screen sizes instead.

The camera_1.unproject(touchPoint) still not working (and confused in which order should I put) and that is because of the two other cameras under show() method. Also, I changed the viewport of camera_1 by 70x100 for falling object answer based on my previous question, " How to Make Objects Fall Faster in a Physics Simulation ". Take a look below:

Also, there is another problem why my sprite (blueberry) didn't align with my finger while dragging and was it because of using my code under resize() method? Take a look:

Sorry for a little delay on how to put up by thinking what cause of the problem is. I'm still using @Majd's solution but I'm still in the problem yet. Is there anymore suggestions? Hope I didn't overwhelm my question a bit due to critical thinking and analysis.

Have you looked at the documentation for the Camera class? you can use Camera.unproject(Vector3 vec) to translate a point from touch input to camera coordinates, ie:

Not the answer you're looking for? Browse other questions tagged java libgdx coordinates resolution touch .

2
How to Make Objects Fall Faster in a Physics Simulation

1
Trouble with touch events on iPhone
12
Word game - board implementation?
0
Libgdx Box2D and Screen Viewport Scaling
1
How do I show a small sprite being dragged by touch?
2
Stretch the game to fit the game window, in Unity 5
1
Error in projecting coordinates from FitViewport to screen in LibGDX
0
How to resize 2D Java game without “squeezing” it?
0
Trying to get events to work for drag and drop