We just launched a new product: Collectives on Stack Overflow. How do they work? Listen to learn more.

Given an angle for an arrow, how do I find its X and Y velocities?

I want to fire an arrow toward the mouse location.

I want to make a method which takes degrees as a parameter, and sets the Yspeed and Xspeed accordingly, so the arrow can reach the mouse position, starting at the player position.

vector angles aiming
Share
Improve this question
edited May 1 '15 at 11:39

This " answer " is to add some visual information to the answers already given. 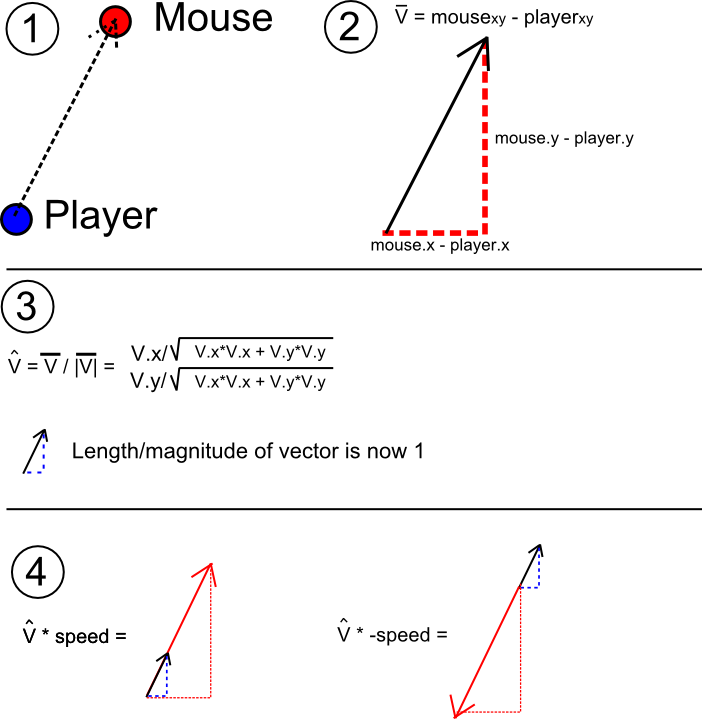 2: We first create a vector ( 2D in this case with component x and y ) by taking the difference from both positions ( mouse - player ).

3: We then Normalize it to create a so called " unit vector ". Which means to bring the length of our vector to 1. This is done by dividing both x and y component of the vector by the length/magnitude. We need this because this is our direction vector. It simply tells in which direction we are heading for the x and y axis.

So recap:
Unit vector = direction
Magnitude/Length/speed = steps to move per frame on x and y axis.

(The lengths in the drawing are just for visual aid, they are not meant to be accurate )

You are trying to fire an arrow from point a(player) to b(mouse position) in 2d space?

you can simply do the following formula to get the direction. (rather than degree)

hope this helps you achive what you want.

Note that this will result in a division by zero when the distance is zero (start and target position are identical). That makes sense, because in that case the vector is undefined (in what direction do you not-go when you want to stay where you are?). This case needs to be handled separately.

Note that there is no reason to use degree here. When you have an angle in degree and a speed, you can convert it to x and y direction using sine and cosine:

In most programming languages, the sine and cosine functions use radiants, not degrees. That means a full 360° circle is 2*PI (approximately 6.283185) you can convert degree to radiants by multiplying them with PI / 180 or approximately 0.01745329.

Not the answer you're looking for? Browse other questions tagged vector angles aiming or ask your own question.

6
How do I find a point given an angle and distance to it?
0
Controlling the movement of player by sprite using Mouse
2
2d vector flips during rotation
1
Unity 3D - Rotate (smoothly) towards a target
1
Find hexes on a hex grid given an angle
2
Angle between character and mouse, and giving bullets velocity in the correct direction
0
LibGDX How to adjust mouse aim angle calculation when screen is resized