Determining if something is on the right or left side of an object?

I have a character in a 3D world which is facing an arbitrary direction on a flat plane, the player can click on the left or right side of the character and based on which side is clicked on a different action happens.

How can I determine which side the click occured on? Obviously for straight on ahead (0,0,1) I can simply use the x coordinate of the click point to determine if it's the left or right hand side, but what about other cases?

You first have to figure out which direction is 'to the right' of your character. For thsi you will need to know which way the character is facing (uusally 'direction') and which way is up typically (0,1,0) or it could be the normal of the plane the character moves around on. 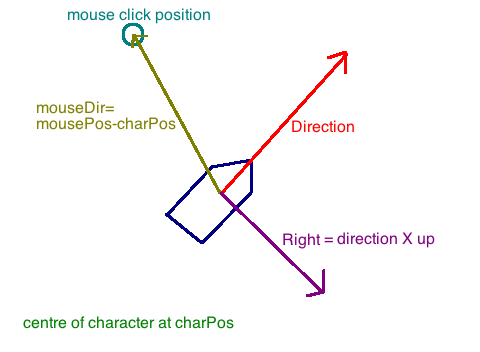 Next, we need a vector representing the relative position of the mouse click and the character.

Not the answer you're looking for? Browse other questions tagged mathematics vector direction .

0
Moving along a flat plane with accordance to camera view
1
Interpolation between two 3D points?
0
Getting the position of a directional light w.r.t. a moving object.
1
How to tell right from left: Finding the vector pointing towards the right side of a character?
1
How to get the directional vector (for IrrKlang) from pitch and yaw?
2
Getting player cube to move left or right in relation to camera based on camera's rotation
1
Calculating 3D character movement based on YAW and Pitch
0
How do you detect which side of a cube is facing up/down/left/right?