So far in previous games I have used simple 2D collision with boxes then checking at pixel level for a collision.

If making a pinball game in nearly a lot of frames the ball will be in contact with a wall or another surface so is there another approach?

There is several layers for playfield (what you see when playing the game) : 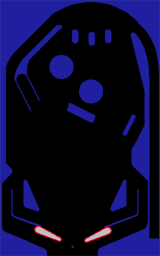 and several layers for collisions : 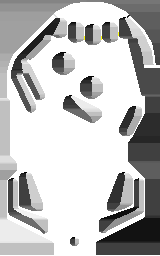 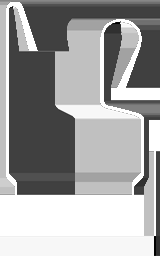 Some special color indexes can also be used for something else than collision, a custom color range (eg : 240 - 255) can be reserved for detecting special zones like spinners, triggers, bumpers, holes, ...

As you can see, this is very simple. There is only a few pixels "read" per frame. Because of this you can make the physics simulation run at a real high framerate eg : 200 fps. Using high framerate will smooth simulation and reduce "tunneling" (this happen when ball goes too fast and pass trough elements without colliding). That simplicity is also what make smooth pinball games possible on 386 computers (and even fast 286) back in the days (among some other tricks like color cycling, vga scrolling and sprite masking ...).

Today, most pinball games are no more made like this. Instead the playfield is a 2d/3d scene using polygons or sprites and collisions are made against some simplified lines, bezier curves, or spheres representing a simplified shape of visual playfield. 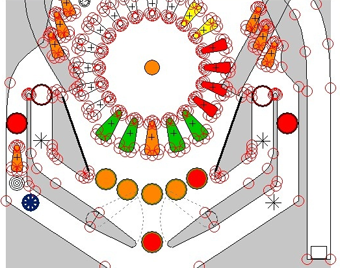 Pinballs have very rich sets of physics, not only holes or walls, but also reacting elements (hitting back) or uneven surface where the ball slows down and then gets it's speed back.

If you want to create a good pinball, the way to go is either to use a 3D collision detection, or self-tailored system with every collidable object having a method with distance and velocities parameters, returning changed velocities.

I made a pinball game a while ago; it was pixel based as well. I had a collision map which just contained the collision data. An approximate collision normal was easy to find:

Take the area of collision map overlapping the ball, find the centre, form the vector from that point to the ball centre, then normalise.

Hope that gives you some ideas :)

First if you make a pinball game, you'll most likely need more bounding-CIRCLE-collision-detection than the bounding BOX one :-)
Given the complexity of the physic involved in a full fledged pinball, i would suggest to look on an existing 2D physic engine. Box2D has quite a reputation in javascript, there might be others but i didn't encounter any good (and free) one.
Rq1 : You certainly use (as i do) the classical split in your game between update and draw. And you use a timer (setInterval/setTimeout) and/or RequestAnimationFrame to call update, then draw, in a regular fashion. A pinball might be the type of game where you want to have one timer driving update, and another driving the draw, so you can adjust the rate of each independently, to work on a wide range of devices. Because you can't just drop (update+draw) if the device is too slow : if the time between two updates (dt) becomes too long, the physic engine might miss a collision.

You might take a look at visual pinball vs future pinball for the 2d vs 3d subject. If you play visual pinball (Everything is made in 2d) then play future pinball, or something like Zen Pinball you do feel the difference in how they play. I personally prefer the 3d, but your project may be better suited to 2d, Only you would be able to decide that

Not the answer you're looking for? Browse other questions tagged 2d collision-detection javascript or ask your own question.