What is the order-less rendering technique that allows partial transparency?

Though I can't remember what the technique is called, so I'm having trouble Googling it.

There are lots of ways to achieve order-independent transparency.

The first (and I think oldest) type of algorithm is called depth peeling and works by "peeling" one transparency layer per pass (in the most basic version). This Nvidia paper for Dual Depth Peeling shows peeling two layers at the same time.

The second type which I only know as "order-independent transparency" (or OIT) works by storing transparent fragments during rendering (e.g. in a linked list) and then sorting them via compute shader. An example is contained in the DirectX 11 SDK, another (and lots of links) is here.

The next thing I remember is Order Independent Translucency which stores fragments by hijacking MSAA.

Hope this contains the algorithm you searched for.

Jens covered the different ways pretty well. I would like to add that additive blending is also order independent and it can be used in limited use cases to achieve pretty good results with very little programming effort.

The following image is rendered with a color something like (-0.5, 1.0, -0.5) with additive blending. Positive color values are given for one color channel and negative values for the other two channels to not increase the average brightness. 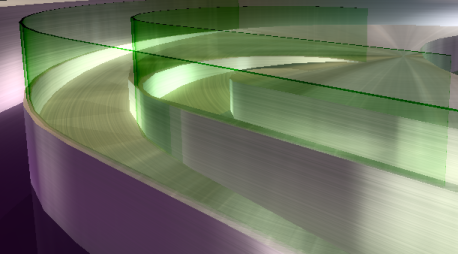 3
How to render transparent meshes without sorting?
25
Why are some games using some dithering pattern instead of traditional alpha for transparency?
1
Rendering order

14
How Do I Do Alpha Transparency Properly In XNA 4.0?
2
Alpha in model XNA
0
SFML Segmentation Fault when using VBOs?
6
Jagged transparency when rendering translucent textures (OpenGL 3.2 + GLSL)
4
How do you display non-cutout transparent 2D textures with a depth buffer? (OpenGL)
7
How do games deal with Z-sorting partially transparent foliage textures?
0
Correct GL settings to mix 2D and 3D rendering
2
Modern OpenGL, billboarding, alpha transparency
1
How are semitransparent polygons rendered in the correct order?