How to determine which thrusters to turn on to rotate the ship?

The configuration of the ship changes dynamically, so I have to determine which thruster to turn on when I want to rotate the ship clockwise or counter clockwise. The thrusters are always axis aligned with the ship (never at an angle) and are either on or off. Here's one of the possible setups: 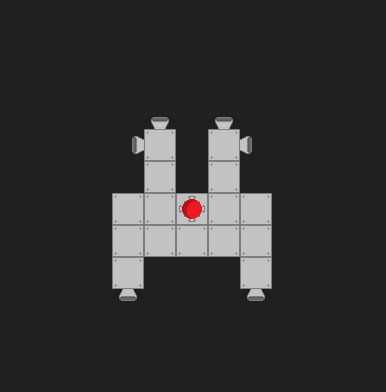 What I've tried so far is to visualize the firing vector and the direction vector to the center of mass of the ship: 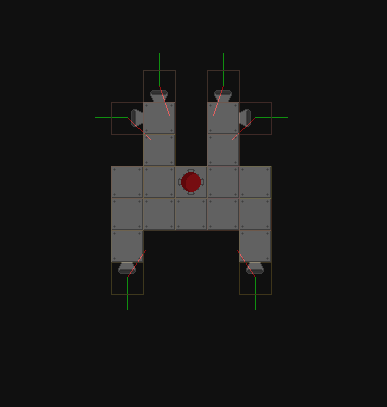 Unfortunately, I didn't get very far with that.

Success! Here it is, and it's rotating as it should: 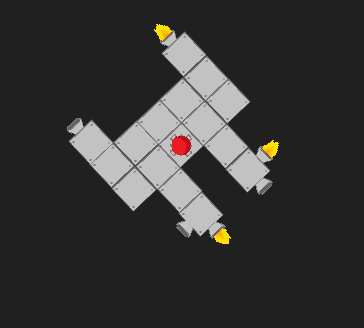 What I've done is the following: for each thruster, I calculate the magnitude of the torque, in relation to the center of mass.

The equation for the mangitude of torque, according to wikipedia, is T = rF sin(theta), where :

When the player presses left, I check the sign of torque for that thruster - if it's less than zero, I fire the thruster. It's just the opposite for turning clockwise.

This could probably be improved by using the dot product to calculate the cosine of the angle between the vectors, but that'll have to wait until tomorrow.

The general 3D expression for torque is the cross product of displacement and force: T = r ⨯ F. In two dimensions, a scalar value for the torque will suffice, and given only four orthogonal orientations for the thrusters, we can write in piecewise form:

Here, F is the magnitude of the force generated by the thrusters, rx and ry are x- and y-components of the vector from pivot point to thruster. Positive torques tend to rotate the ship counter-clockwise. Using the four formulae above, it is trivial to deduce the sign of the torque each thruster produces.

For a modestly accurate representation of physics, you need not only know the sign of the thrust, but also its total magnitude and the rotational inertia. Moreover, you might not simply want to activate all properly aligned thrusters to do a rotation. 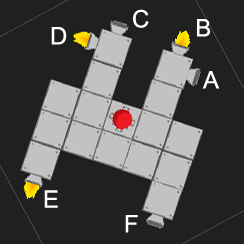 As drawn, full power to thrusters B, D and E will maximize the rotation, but will also accelerate the ship to the right. Shutting down D will prevent this. If instead, accelerating right is intended, but a clockwise rotation is not, the most efficient way to go is enabling both C and F at two thirds of full power along with D.

If this isn't beyond the scope of what you're trying to do, you would have to write some sort of solver for the equations of motion, clearly not a simple task.

A few different things. First, we need to recognize that this is an under-constrained problem. That is, there are many different combinations of thrusters which can fire to result in rotation in the same direction. I'm assuming that in your situation there are only two states for the thrusters, "on", and "off", and all thrusters output equal force.

Third, if you want to calculate how a certain thruster will affect the rotation, you have it right, although you are using an inefficient formula. Torque can be calculated as r x F, which has magnitude r*F*sin(theta). However, calculating the angles in this case is an inefficient method. Instead, you should use the cross-product definition of torque directly, as this will be much simpler using the representations you have. Because all your vectors have no z component, the formula for cross product simplifies greatly.

Without changing the results of your computation at all, we can just update your code

That's much nicer (and faster).

You suggest in your own answer that your solution is to fire all the thrusters with torque in the right direction. Now, that pretty much solves the question that you asked. However, I expect that some point along the line, you're going to find that your strategy is not so satisfactory, if a user holds down the "rotate" button, and all thrusters with a positive torque rotate, potentially moving them on top of rotating them (I'm not sure of the level of detail of your simulation, if you actually do calculate the forces from the thrusters, or if you just visually show them firing and then rotate your model with a constant acceleration or something. Either way, you want the thrusters to be firing at least approximately accurately).

You make no consideration of the net force on the ship. If you had arbitrary thruster amounts, then this could turn into a pretty complicated problem. However, since our thrusters have only two states, it's pretty simple to analyze. I'm not sure exactly what our goal is here, so I could imagine two different ones: first, we want to minimize the total force, while still keeping the torque in the direction we want. Second, we want to maximize the ratio of torque to total force.

As an aside, if you could imagine an additional "thruster volume" control that affects the power of all thrusters simultaneously, then you could set this control so that your two solutions have equal torque, and you see that the second solution can only have a smaller displacement than the first. However, we need to remember that if it is possible to fire the thrusters so that you only rotate and do not move at all, then both solutions will be the same.

So, we're going to go with the second solution, based on the arguments of the previous paragraph. Now, when analyzing the total force, we can simply note that there are only four directions the engines can point. Thus the total force in the x direction is just the number of thrusters pointing left minus the number pointing right, and likewise for the y direction.

After writing up this far, I have to think some more about the algorithm to optimize it. I think the rest of my post is helpful as is, so I'm posting it, but I'll update when I figure out the best way to optimize this configuration (I've thought of a few ways to get approximate answers, but none of them are exact).

Not the answer you're looking for? Browse other questions tagged mathematics physics .