How can I acheive a smooth 2D lighting effect?

I'm making a 2D tile based game in XNA.

How can I get it to look like this?

Instead of each block having its own tint, it has a smooth overlay.

I'm assuming some sort of shader, and to pass the lighting values for the surrounding tiles to the shader, but I'm a beginner with shaders so I'm not sure.

My current lighting calculates the light, and then passes it to a SpriteBatch and draws with the tint parameter. Each tile has a Color that is calculated before draw in my lighting algorithm, which is used for the tint.

Here is an example on how I currently calculate lighting (I do this from left, right, and bottom too, but I got really tired of doing this frame by frame...)

So actually getting and drawing the light so far is no problem!

I have seen countless tutorials on fog of war and using gradient circular overlays to create smooth lightning, but I already have a nice method to assign each tile a lightning value, it just needs to be smoothed between them.

Don't draw your lighting by tinting your tile sprites. Draw your unlit tiles to a render target, then draw the tile lights to a second render target, representing each one as a grayscale rectangle covering the area of the tile. To render the final scene, use a shader to combine the two render targets, darkening each pixel of the first according to the value of the second.

This will produce exactly what you have now. That doesn't help you, so let's change it a bit.

Change the dimensions of your lightmap render target so that each tile is represented by a single pixel, rather than a rectangular area. When compositing the final scene, use a sampler state with linear filtering. Otherwise leave everything else the same.

Assuming you've written your shader correctly the lightmap should be effectively "scaled up" during compositing. This will get you a nice gradient effect for free via the graphics device's texture sampler.

You may also be able to cut out the shader and do this more simply with a 'darkening' BlendState, but I'd have to experiment with it before I could give you the specifics.

I had some time today to actually mock this up. The answer above reflects my habit of using shaders as my first answer to everything, but in this case they're not actually necessary and their use needlessly complicates things.

The blending equation is

So with our custom BlendState, that becomes

To put this into practice, first do whatever you need to do to create your lightmap:

Then just draw your unlit scene directly to the backbuffer as you normally would:

Then draw the lightmap using the custom BlendState:

This will multiply the destination color (unlit tiles) by the source color (lightmap), appropriately darkening unlit tiles, and creating a gradient effect as a result of the lightmap texture being scaled up to the necessary size.

Okay here is one very simple method to create some simple and smooth 2D lightning, render in three passes:

In pass 1 you draw all the sprites and the terrain.

In pass 2 you draw a second group of sprites which are the light sources. They should look similar to this:

Initialize the render target with black and draw those sprites onto it with Maximum or Additive blending.

In pass 3 you combine the two prior passes. There are multiple different ways how they can be combined. But the simplest and least artsy method is to blend them together via Multiply. This would look like this: 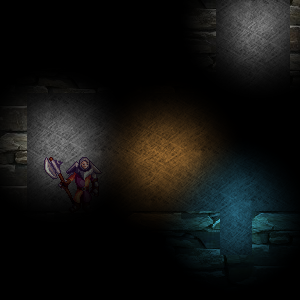 The second link you posted looks like a fog of war of sorts, there are a couple of other questions on this

That looks to me like a texture, where you "erase" bits of the black overlay (by setting the alpha of those pixels to 0) as the player moves forward.

I would say the person must have used a brush type "erase" where the player has explored.

Light vertices (corners between tiles) instead of tiles. Blend lighting across each tile based on its four vertices.

Do line-of-sight tests to each vertex to determine how lit it is (you can either have a block stop all light or decrease light, e.g. count how many intersections to each vertex combined with distance to calculate a light value rather than using a pure binary visible/not-visible test).

When rendering a tile, send the light value for each vertex to the GPU. You can easily use a fragment shader to take the interpolated light value at each fragment in the tile's sprite to light each pixel smoothly. It's been long enough since I've touched GLSL that I wouldn't feel comfortable giving real a code sample, but in pseudo code it would be as simple as:

The vertex shader simply has to pass the input values on to the fragment shader, nothing even remotely complicated.

You'll get even smoother lighting with more vertices (say, if each tile is rendered as four sub-tiles), but that may not be worth the effort depending on the quality you're going for. Try it the simpler way first.

Not the answer you're looking for? Browse other questions tagged xna c# shaders rendering lighting .

0
How to implement a lightmap
14
How can I create gradiented Fog of War?
5
Implementing fog of war in opengl es 2.0 game
5
2D - Smooth lighting with shadows for a tile-based game
3
2D Smooth Tile Lighting