How do I rotate a sprite so that it is 'pointing' in the direction it is moving?

I have a sprite, e.g a missile, heading in a certain direction (using a velocity vector). How do I figure out its how much to rotate it so that it gets drawn 'pointing' in the direction it is heading?

The angle you need to rotate by is the the angle your velocity vector makes with the positive x-axis. 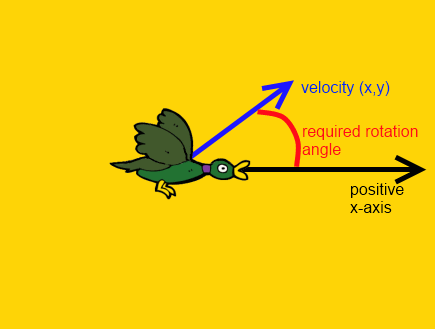 This angle can be calculated using the inverse tan of the slope of the vector. In XNA, we use the Math.Atan2 function. Give the function the y coordinate and the x coordinate of the velocity vector (in that order). Atan2 will return an angle between +PI/2 and -PI/2. (+180 to -180 degrees) depending on the vector. Vectors below the x-axis (pointing down) have a negative angle. Vectors above the x-axis (pointing up) have positive angle.

Use this angle in your draw method to rotate the sprite. 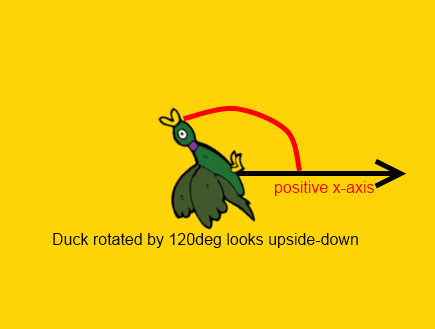 In my example I used a duck sprite, which if rotated by more than PI/4 (90deg) will start to look 'upside-down'. This might not be a problem for some spites if they do not have 'correct' orientation. (e.g. a missile), but things like aeroplanes or birds might look 'wrong'. Fix this issue by flipping the sprite vertically if the sprite is moving right to left (rotation is not in range -PI/4 to PI/4).

We can check for this either by looking at the angle to see if it is greater than PI/4 or less than -PI/4, OR, equivalently, we can simply check which direction along the x-axis the sprite is moving. If it is moving right to left it will have a negative x-component, this is the way I check in the code above. 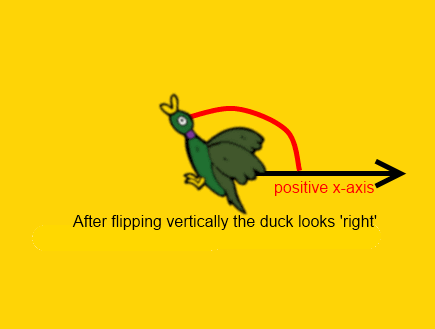 0
Sprite rotation algorithm
27
How can I calculate the angle and proper turn direction between two 2D vectors?
3
How do I get the axes for SAT collision detection

7
Turning a sprite such that it rotates in the direction that's most efficient
4
How can I make a sprite move in the direction it's facing using radians?
6
Simple thruster like behaviour when rotating sprite
5
How to smoothly rotate a vector in a direction?
0
Problem with sprite direction and rotation
0
Rotate sprite direction Cocos2d
2
Finding the components of Proportional Navigation in 2D
1
Rotate Sprite towards another sprite
2
Rotating A model in 3D so it matches its direction of movement
0
How can I find the direction a sprite is moving?