How to limit click'n'drag movement to an area?

I apologize for the somewhat generic title. I'm really don't have much clue about how to accomplish what I'm trying to do, which is making it harder even to research a possible solution.

I'm trying to implement a path marker of sorts (maybe there's a most suitable name for it, but this is the best I could come up with).

In front of the player there will be a path marker, which will determine how the player will move once he finishes planning his turn. The player may click and drag the marker to the position they choose, but the marker can only be moved within a defined working area (the gray bit). 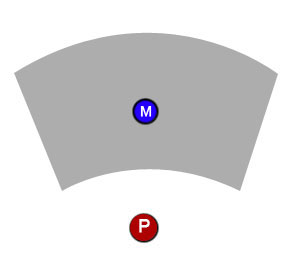 First of all, how exactly should I define that workable area? I can imagine maybe two vectors that have the player as a starting point to form the workable angle, and maybe those two arcs could come from circles that have their center where the player is, but I definetly don't know how to put this all together.

And secondly, after I've defined the area where the marker can be placed, how can I enforce that the marker should only stay within that area? For example, if the player clicks and drags the marker around, it may move freely within the working area, but must not leave the boundaries of the area. So for example, if the player starts dragging the marker upwards, it will move upwards until it hits he end of the working area (first diagram below), but if after that the player starts dragging sideways, the marker must follow the drag while still within the area (second diagram below). 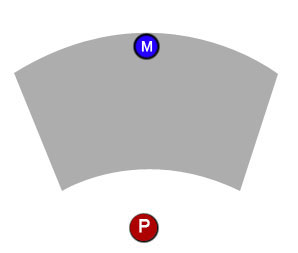 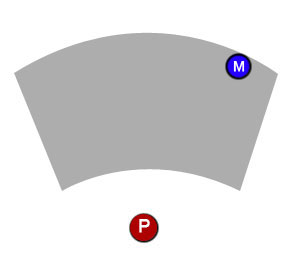 I hope this wasn't all too confusing. Thanks, guys.

Edit: In case this makes a difference, I'm using C++ with Marmalade SDK.

You can define a workable area like the one in your question with three values:

These values will be based off a center point which may or may not be the player's position. The shape of the workable area depends on where you place this point. 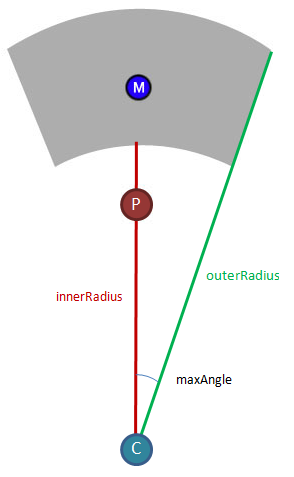 In the example above the center position lies a certain distance (let's say 50 units) behind the player. This could be easily calculated as:

To limit the position of the marker to that workable area, first move the marker as you normally would. Then validate the distance between the center point and the marker:

Finally, validate the angle of the marker to the specified range. I'll use pseudocode for this one:

Look around on how to rotate a point around another. It can be done either with trigonometry or a transformation matrix.

You might also want to take into account the marker's size and make the radius and angle a little smaller to compensate.

Edit: On second thought, it might look more natural if you validate the angle first, then the distance, so try both alternatives!

I was thinking how the problem could be solved if the shape was irregular, and one couldn't define it mathematically. Warning: this is a dirty solution, not for the faint of heart. 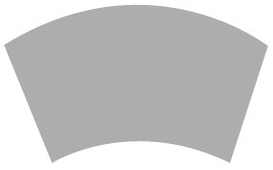 2. And convert it to a monochromatic bitmap: 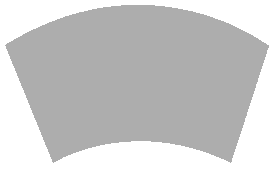 and name it scale_0

and name it scale_1

4. And so on, until there's a bitmap less then 4 pixels wide/tall:

5. Now we have our area as monochromatic bitmaps of different resolutions: 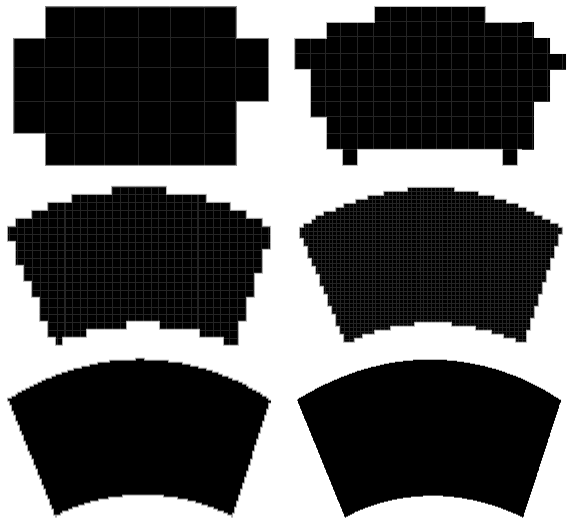 6. Take the last image (here "scale_6") and iterate through all of it's pixels.

8. Take first image (the biggest = the one with biggest resolution), again loop through 4 pixels, and you finally have the pixel that is closest to mouse cursor:

9. However, I'm treating "M" as a point here. If you want it to be a circle that fits completely, you need to contract (shrink) the shape by circle.radius pixels first.

I thought I'd add that this algorithm will only work if you will use not monochromatic but grayscale images and treat a pixel as "full" if it's not white, and as "empty" if it's exactly white... OR if your resizing algorithm changes every group of 4 pixels into 1 black pixel every time when at least one of these 4 pixels wasn't white.

Not the answer you're looking for? Browse other questions tagged movement geometry .

50
Looking for a good technique for character movement in hack&slash game
5
How to implement curved movement while tracking the appropriate angle?
1
Movement constrained to the faces of a cube
0
Character movement on a 2D tile map
6
RTS Movement + Navigation + Destination
3
How to decide the direction of movement, when navigating a fixed path in a 2d overworld?
0
Raycast Movement on a sphere
15
Procedurally generating a building of specific area
0
Move Camera After Player Moves Certain Distance