What's the difference between mesh and a model?

A mesh is part of a model. The mesh defines the vertices of an object. Typically storing them in such an order as to imply their connectivity, like every 3 form a triangle. 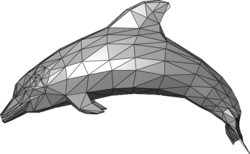 Like a mesh of vertices to define the shape of an object.

The model can have other elements like an armature, animation and texture information. It can additionally include more than one mesh. Though, I imagine they're similar enough to be used interchangeably in many cases.

The mesh (as in one single mesh) is just data about the structure of a model. The model contains textures which are used to define how to render it's surfaces. It also contains several variations of the same mesh for animation, normally controlled by bones. Each animation frame could be considered a mesh on it's own.

A model is a general term to describe data. In the specific case of 3d models, we mean the mesh, it's uv-mapping, texture and animations.

A model may not have any texture or animation(if it is not complete or if it's an inanimate object or does not require textures), as long as there is a mesh it will still be referred to as a model. The mesh itself is only the 'wireframe' part of the model. Meaning the collection of edges and their connecting vertices that represent the structure of a model. Unlike a texture which represent how the model is colored, how it reflects light and such things as bump mapping details or it's animation which represent the models motion.

So every mesh is a model on it's own. Not every model is only a mesh.

here are some references:

You may also hear of the term "Solid Model": This means that the underlying mesh model has had such additional information applied, e.g. construction material (and thence can be calculated the model's weight, Centre of Gravity, Centre of Inertia, etc), to the extent that the model is so 'physically' well defined, in a real world sense, that it can be referred to as 'solid'.

In simple terms, a mesh can be regarded as the outline of some shape/object. And the model gives the complete information of that object - texture, reflectivity, color, etc.

Not the answer you're looking for? Browse other questions tagged 3d graphics terminology or ask your own question.

0
What does a Mesh consist of?