I need some ideas in order to finish algorithm. I'm randomly placing objects (bitmaps) on canvas without overlapping. Time needed to finish it is my problem. When I need to spawn for example 80% of canvas it takes to long. So i was thinking : I should make some change when the bitmaps take off 50 % of canvas. I want to tell algorithm that it should generate new locations (x,y) where it is free space.

My question is : How to render new location (x,y) in place where is free space.

Thanks for ideas. Now I've got problem.

OK, thanks for ideas. I've got a problem.

Link to picture: Picture with grid

Divide your world (screen) into a grid.

If all objects are not bigger then 20x20 px, then if you divide your screen into 40x40 grid tiles, you can just:

Edit: in regards to your question: 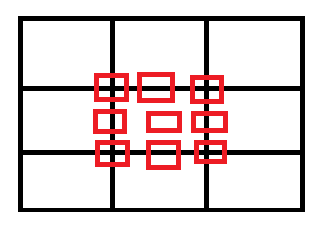 Yes, you want to register one object to all grid cells it occupies. One way of doing this would be creating a grid of arrays of objects: 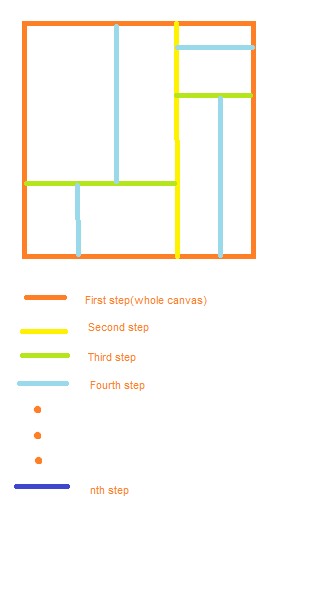 To divide the canvas into pieces, make the whole canvas your first rectangular piece, then recursively split it until each piece is small enough.

For example, starting with the canvas, do a coin toss to determine if you split it with a horizontal line or a vertical line. Randomize where that line passes. Now run the same function on the two pieces you created and the stopping condition will be that the new piece is small enough by your definition.

Not the answer you're looking for? Browse other questions tagged android collision-detection procedural-generation or ask your own question.

0
How do I randomly spawn objects in 2D game?

10
How to determine which cells in a grid intersect with a given triangle?
2
Testing for 2D collision outcome
19
Where should collision detection logic be placed?
9
How to find 2D grid cells swept by a moving circle?
8
Is it better to hard code data or find an algorithm?
3
How to choose cell to put entity in in an uniform grid used for broad phase collision detection?
4
Is there algorithm for boxcasting or thickray casting?
0
Is there such thing as a hybrid View that combines SurfaceView and GridView in Android?
0
Most efficient way to detect and act upon collision (Specific for my 2d game)
2
How to guarantee that player fits rooms of a cave created by Cellular Automata?