I am making a 2D tile map based putt-putt game.

I have collision detection working between the ball and the walls of the map, although when the ball collides at the meeting point between 2 tiles I offset it by 0.5 so that it doesn't get stuck in the wall. This aint a huge issue though.

The next thing I tried to do was implement floating blocks in the middle of the map for the ball to bounce off of. When a ball collides with a corner of the block, it gets stuck in it. So I changed my determineRebound() function to treat corners as if they were circles. Here's that functon:

This is where things have gotten messy. Collisions with 'floating' corners work fine, but now when the ball collides near the meeting point of 2 tiles, it detects a corner collision and does not rebound as expected.

I'm a bit in over my head at this point. I guess I'm wondering if I'm going about making this sort of game in the right way. Is a 2d tile map the way to go? If so, is there a problem with my collision logic and where am I going wrong?

Any advice/feedback would be great.

First of your problem is that you're not looking in a further perspective. The ball blocks itself on a wall - just move it 0.5 pixels away. Why not try to unblock it instead? Later you treat a corner like a circle (do you mean a point? If not, I don't understand the idea and it makes me dizzy when I try).

It's OK to do quick, dirty fixes and try if they work. But after every such fix you should consider changing your base - well, you actually did that by asking the question, so I'll better get to the answer:

You have some easy conditions for your ball colliding with terrain, because:

So we have a situation: 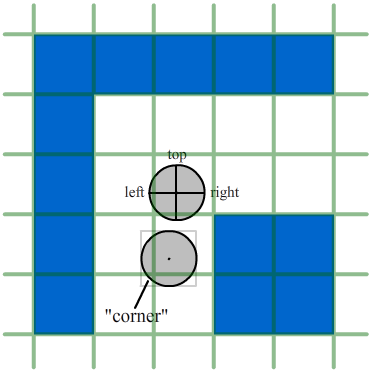 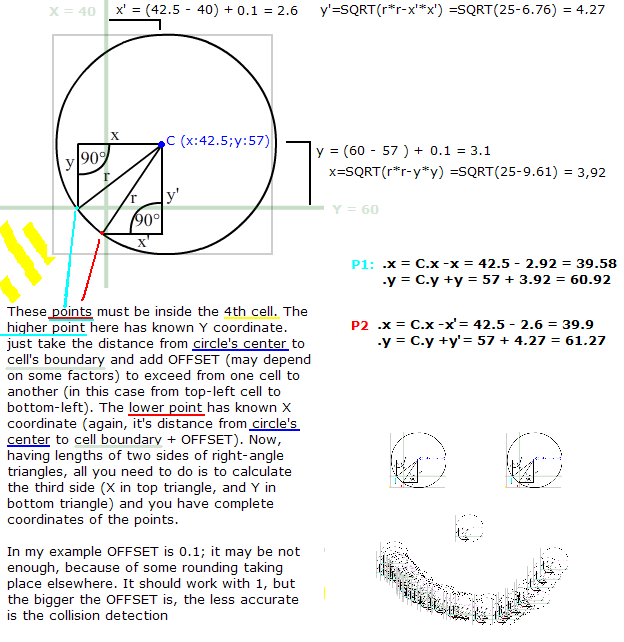 You should substitute '20' literals with some CELL_WIDTH constant. Keep in mind this could be optimized a lot, but I didn't want e.g. mess with minus signs, because the equations would be a lot less readable if I did.

As for collision-resolution I would move the circle back as in another answer I made. As the question was deleted, I'll just paste it here:

Now, I know in your case it's a ball. It's a little harder, but here's how you should do it:

And the last point of your question, how to detect ball's callision with a rotated square (I assume it's rotated)

Not the answer you're looking for? Browse other questions tagged java collision-detection tilemap collision-resolution .