Depth interpolation for z-buffer, with scanline

I have to write my own software 3d rasterizer, and so far I am able to project my 3d model made of triangles into 2d space:

I rotate, translate and project my points to get a 2d space representation of each triangle. Then, I take the 3 triangle points and I implement the scanline algorithm (using linear interpolation) to find all points[x][y] along the edges(left and right) of the triangles, so that I can scan the triangle horizontally, row by row, and fill it with pixels.

This works. Except I have to also implement z-buffering. This means that knowing the rotated&translated z coordinates of the 3 vertices of the triangle, I must interpolate the z coordinate for all other points I find with my scanline algorithm.

The concept seems clear enough, I first find Za and Zb with these calculations:

Then for each Zp I do the same interpolation horizontally: 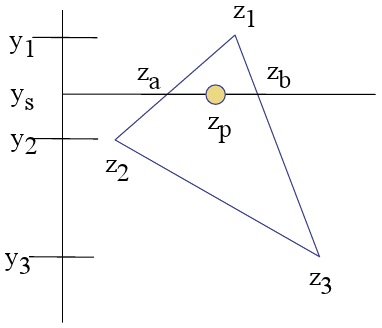 And if current z is closer to the viewer than the previous z at that index THEN write the color to the color buffer AND write the new z to the z buffer. (my coordinate system is x: left -> right; y: top -> bottom; z: your face -> computer screen;)

The problem is, it goes haywire. The project is here and if you select the "Z-Buffered" radio button, you'll see the results... (note that I use the painter's algorithm (-only- to draw the wireframe) in "Z-Buffered" mode for debugging purposes)

PS: I've read here that you must turn the z's into their reciprocals (meaning z = 1/z) before you interpolate. I tried that, and it appears that there's no change. What am I missing? (could anyone clarify, precisely where you must turn z into 1/z and where(if) to turn it back?)

[EDIT] Here's some data on what maximum and minimum z values I get:

Before I go into painstaking debugging, can someone confirm that my concept so far is correct?

I have solved the z-buffering. As it turns out, the drawing order wasn't messed up at all. The z coordinates were being calculated correctly.

The problem was, in an attempt to increase my frame rate, I was drawing 4px/4px boxes, every 4th pixel, instead of actual pixels on screen. So I was drawing 16px per pixel, but checking the z buffer for only one of them. I'm such a boob.

TL/DR: The question still stands: How/why/when do you have to use the reciprocal of Z (as in 1/z) instead of Z? Because right now, everything works either way. (there's no noticeable difference).

Quick answer: Z is not a linear function of (X', Y'), but 1/Z is. Since you interpolate linearly, you get correct results for 1/Z, but not for Z.

You don't notice because as long as the comparison between Z1 and Z2 is correct, the zbuffer will do the right thing, even if both values are wrong. You will definitely notice when you add texture mapping (and to answer the question you'll have then: interpolate 1/Z, U/Z and V/Z, and reconstruct U and V from these values: U = (U/Z)/(1/Z), V = (V/Z)/(1/Z). You'll thank me later)

An example. Get a piece of paper. Top-down view, so forget the Y coordinate. X is the horizontal axis, Z is the vertical axis, the camera is at (0, 0), the projection plane is z=1.

Why? Because for every step in the X' direction, you don't move the same amount in the Z direction (or, in other words, Z is not a linear function of X'). Why? Because the more you go right, the farther away the segment is from the camera, so one pixel represents a longer distance in space.

Not the answer you're looking for? Browse other questions tagged javascript depth-buffer interpolation software-rendering .

5
How does a BSP tree work for Z sorting?
7
UV texture mapping with perspective correct interpolation
2
How scanline rendering finds an intersection with an object
6
overlapping 3d particles not blending nicely when at the same z
2
How to determine the visibility of a single vertex, given a viewpoint?
1
Grab depth buffer with unlockable D3DFORMAT
0
View "distortion" or "stretching" when looking up/down? (Software renderer)
1
Calculating t value to use with Hermite interpolation