In my XNA game I have two objects that collide. When the first object collides with the other it is able to latch on to it and move it about the world. I am having a problem with the math here (Math isn't my strong point). I currently have the second object latch on to the first and move around with it, but I cannot get it to keep it's original direction. So, if the object is facing up it should keep this direction relative to how it is being rotated with the original item.

Any tips on how I could best to achieve this?

To find the position of the second object relative to the first object:

In addition to @tesselode's answer, I would recommend you keep a list of attached objects for every world object in your game. Something along the lines of List<WorldObject> AttachedObjects. Then, when you'd detect a collision, you would add the black rectangle to the red one's AttachedObjects. After that, it's only a matter of updating the children's positions using @tesselode's method every time you update the parent's position.

I'm assuming one of the two will have control over the other one, much like a fork-lift. In your drawing, I'm assuming this is the black one, and the red one is the package. You only mention you're having trouble with angles, so that's all I'll cover.

When the objects latch together, you should remember the angle difference between the two (I'll call this Theta). I have drawn this in figure 2 with the arrows from the first figure drawn over each other. Until the objects are unlatched, the angle of the Red object will be determined by the Black's angle plus Theta, as shown in figure 3. 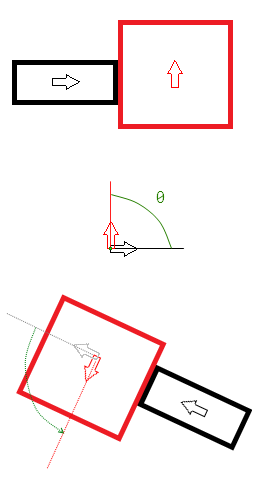 You could implement an ability to have child objects for an object (where child objects would be automatically affected by changes to the position/rotation of parent). Then upon collision when they should latch together, you make an invisible object and make both of the attached objects its children. Then, instead of applying transformations (movement, rotation) on the individual objects, you apply it on the big one, OR you could still apply forces to the individual children objects, which would check "do I have a parent?", and if yes, the force would be sent to the parent (which would merge forces from all child objects into one vector it would apply to itself).

Also, this approach should properly handle their rotation, if you calculate center of mass for the invisible parent according to weights of the latched objects, which John's method doesn't seem to accomplish (joined object rotate around their new shared center of mass, not around center of mass of one of the objects), and you could easily nest this kind of behavior without any additional code required. It seems to be the more robust and flexible approach.

+condition if the force applied to child is strong enough to break the joint, and you can handle the "unlatching" of it by simply removing the parent->child relationship. If there's only one child left, you make it seperate too and remove also the invisible parent.

I can provide more details (with pictures and at least pseudocode and such) if you're interested.

Not the answer you're looking for? Browse other questions tagged xna rotation or ask your own question.

3
How to make an object stay relative to another object

0
(Quaternion based) Trouble moving foward based on model rotation
1
Camera wont stay behind model after pitch, then rotation
12
Arbitrary Rotation about a Sphere
0
XNA: Camera's Rotation and Translation matrices seem to interfere with each other
3
How can I make an object move in four directions relative to its rotation?
0
Getting vector relative to other vector in rotating object
5
How to make one 3D object face another?
0
What type of rotation is this and how do I apply it?
4
Camera rotation deforms objects
0
how do I move an object based on rotation of another object?