Is it possible to robustly find all the graph minors within an arbitrary node graph where the pinch points are generally not single nodes? I have read some other posts on here about how to break up your graph into a Hamiltonian cycle and then from that find the graph minors but it seems to be such an algorithm would require that each "room" had "doorways" consisting of single nodes.

To explain a bit more a visual aid is necessary. Lets say the nodes below are an example of the typical node graph. What I am looking for is a way to automatically find the different colored regions of the graph (or graph minors) 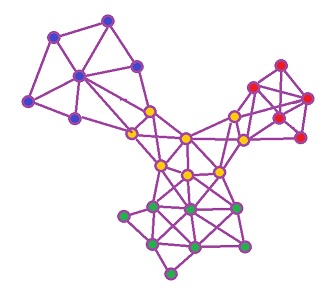 I'm assuming that you have a planar embedding of your graph and can determine the circumference. An interior path is a path between nodes that doesn't contain edges on the circumference. The short paths you're looking for have the following properties:

Your "pinch points" are of course special cases where that length is zero.

Now, how would you determine such short interior paths? It's not horribly inefficient to create a NxN table listing the shortest interior paths between all N edge points. So, just get the local minima from that.

Not the answer you're looking for? Browse other questions tagged ai path-finding graph graph-theory or ask your own question.