Dijkstra and A* are all nice and popular but what kind of algorithm was used in Warcraft 1 for pathfinding?

I remember that the enemy could get trapped in bowl-like caverns which means there were (most probably) no full-path calculations from "start to end". If I recall correctly, the algorithm could be something like this:

A) Move towards enemy until success or hitting a wall

B) If blocked by a wall, follow the wall until you can move towards the enemy without being blocked and then do A)

[edit] As explained to Byte56, I'm searching for a low cpu/mem/mem-bandwidth algo and wanted to know if Warcraft had some special secrets to deliver (never seen that kind of pathfinding elsewhere), I hope that that is more concordant with the stackexchange rules.

Actually this turned out to be a more interesting question than I thought.

I forgot about the "right hand rule" for pathfinding, but it appears that the game uses it.

Say you're lost in a basement and it's dark. The easiest way to find an exit (if there is one!) is to place your hand on the nearest wall and "follow the wall", following all it's turns and going through it's crevices, until you find an exit. The only time this doesn't work is if you happen to grab a pole ("island") in the basement, then you'll be walking around that pole forever.

I think the game uses some variation of this "follow the wall" rule until the unit can find a beeline to the destination point. 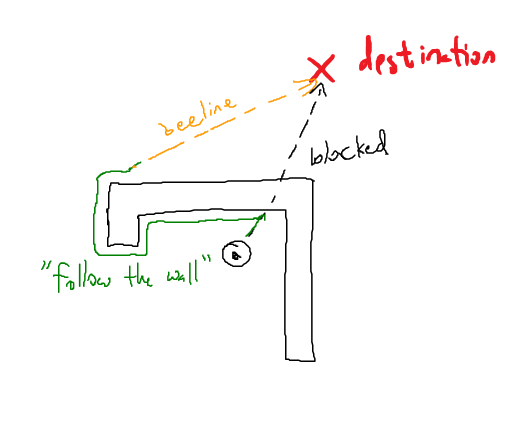 I don't think "how did X game accomplish Y?" is technically in the scope of this stack, but I'll hazard a guess as to why some pathfinding algorithms get stuck in a bowl: They run something like A*, but only up to a certain depth. This limits the amount of processing time spent pathfinding, but doesn't guarantee exhaustive search [which might be a good thing, Starcraft had that issue where dragoons would wander to the other side of the map trying to find a path] 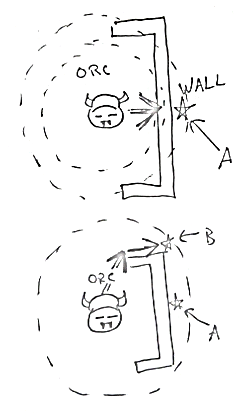 In the top scenario, the top orc's search radius is too small. The "best" visible point is marked A, the "best" navigable point is on the closer side of the wall across from A.

In the bottom scenario, point A is now navigable, but point B should be the "best" navigable point, and that would be the path a constrained A* would take.

10
pathfinding with obstacles in a Warcraft 3 like game
6
Best pathfinding for a 2D world made by CPU Perlin Noise, with random start- and destinationpoints?
65
Pathfinding for fleeing
1
Pathfinding in non tile-based 2d map (maybe potential field)