I have implemented much of my game logic right now, but still create my maps with nasty for-loops on-the-fly to be able to work with something. Now I wanted to move on and to do some research on how to (un)serialize this data. (I do not search for a map editor - I am speaking of the map file itself)

For now I am looking for suggestions and resources, how to implement a custom file format for my maps which should provide the following functionality (based on MoSCoW method):

I am developing with C++ (using SDL) and targetting only Windows. Any useful help, tips, suggestions, ... would be appreciated!

Result of the discussion below

I have been designing my map file format the last few hours and came up with a skeleton (contains only layers for now - I'll leave the rest to everyone designing his/her own format) which I wanted to share with everyone interested - if you have the same intentions you can get some kind of inspiration. The full-size screenshot can be downloaded at Imgur. 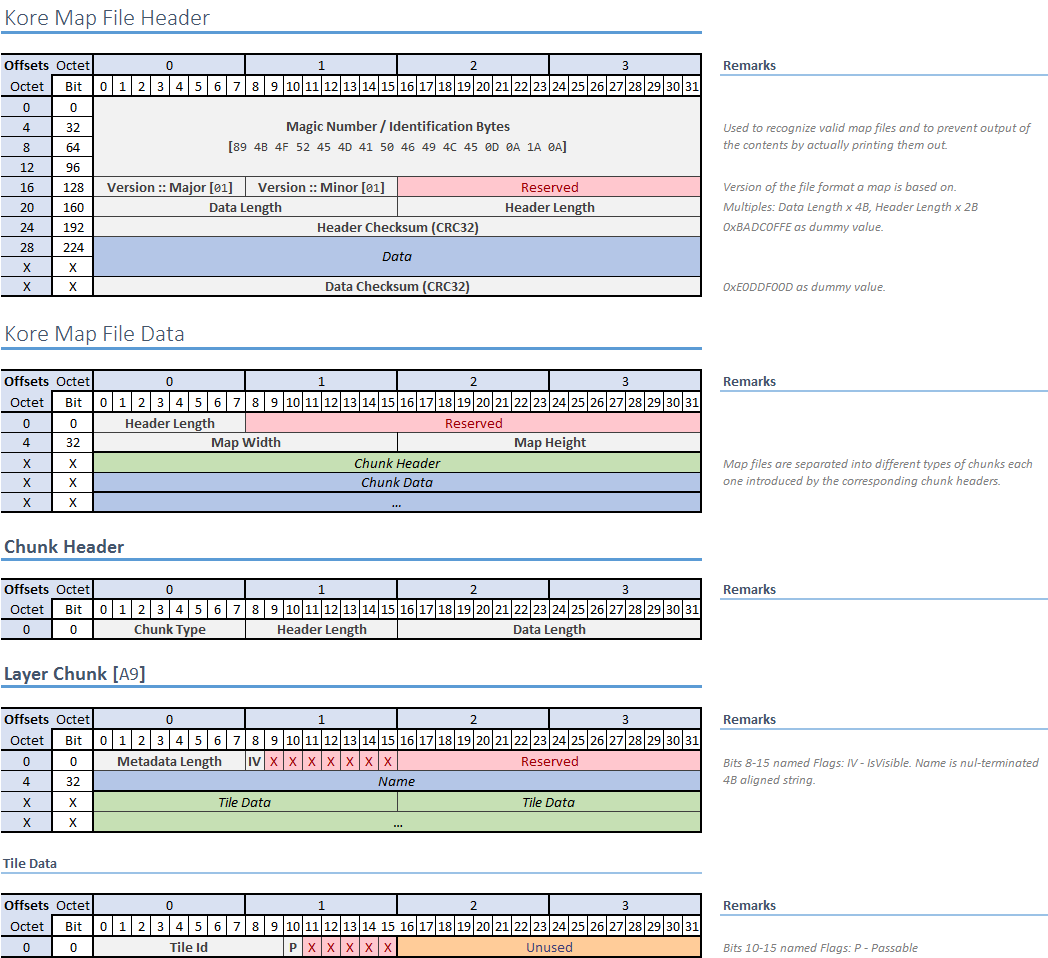 Personally, I'm more of a fan of binary formats with sections (like Windows PE, just much simpler). They are also easier to parse (but that's just my opinion.... I did work with XML enough to give me headaches, checking whether getElementByName has returned a single value or a list of values... ugh). So, if I were you, I'd make it something like this:

But the best thing in this approach in my opinion is - you get to do it all by yourself. Lots of trial-and-errors, but at the end, you end up learning a lot.

You could use the TMX map format used by the Tiled editor (as well as several other map editors).

Even if you don't use Tiled yourself, the TMX format supports all the functionality you mentioned and it has several existing loaders/parsers for a variety of languages. It's also very easy to understand the format and extend it for your own game.

Not the answer you're looking for? Browse other questions tagged c++ maps sdl data-structure file-format .

7
XNA Content Pipeline With Map Creation Utility
7
How to create a game save file format in c++ using STL
4
Question About An Implementation Of Parallax Scrolling In C++/SDL/OpenGL
0
How do I manage textures in memory in OpenGL?
2
Map format for 3d open world
0
minecraft mapping from tibia OTBM file
4
Solutions for maintaining importers and exporters when chaning file formats