One way to do it would be to make the character consist of different parts. I'm currently working on a 3D game, and I have written an exporter for Blender in Python that takes the currently active (selected) object and exports it's data and then goes recursively through all of the object's children and their children and so on, so I end up with a sort of a file with a tree like structure where there's one root object (the first one written) and the other ones are laid down after it, and they all have number of children written as part of their data so the parser (written in C) knows how to reconstruct the entire model tree so I can translate/rotate/scale any part and all it's children will have the same transformation applied.

So, I'd suggest doing a similar thing, just making things fixed. For example: 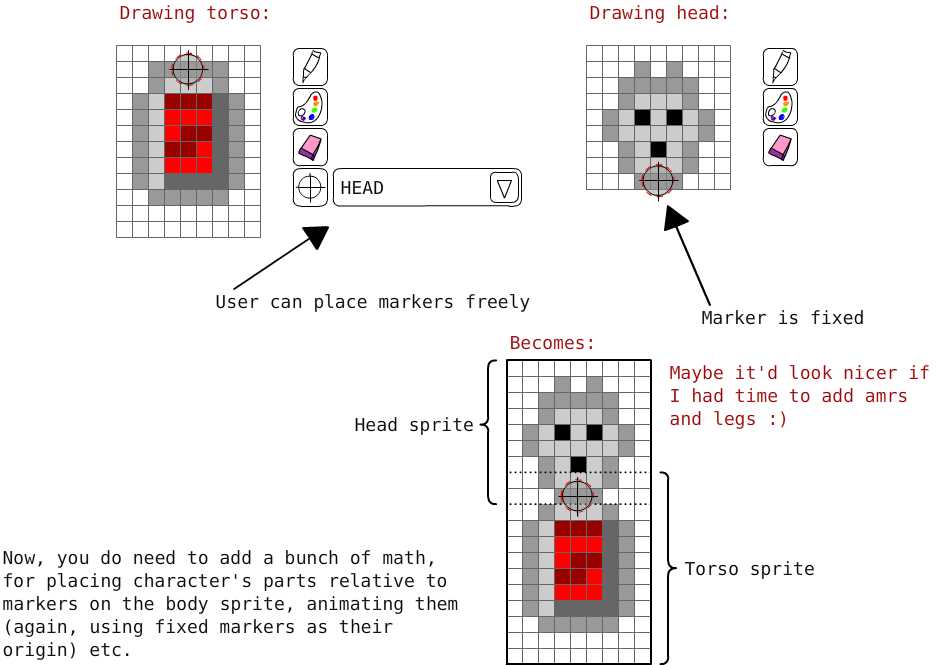 Not the answer you're looking for? Browse other questions tagged xna animation character .

2
How can I get my first-person character in Unity to move to a ledge with an animation?
10
What's the best way to create animations when doing Android development?
5
Random monsters move in-sync instead of individually
0
Drawing an animation over an already drawn screen
1
Image Does Not Animate and is Stuck in one Frame
0
Unity - How to move a user controlled animated gameobject programmatically?
1
Why doesn't my character's outfit animate with the character model?
1
Animating a sprite character with Multiple Parts
1
Why isn't my vertical scrolling functioning properly?
0
Changing contents of level depending on which character was selected