What is a fast way of limiting the heading vector to a certain angle so that it turns in greater distance relative to the limit.

A smaller cone/angle should make the object take a far bigger curve to traverse to reach its goal where a larger cone/angel allows the object to rotate faster in the direction of its goal.

If there are some vector tricks i'll be glad to know them! 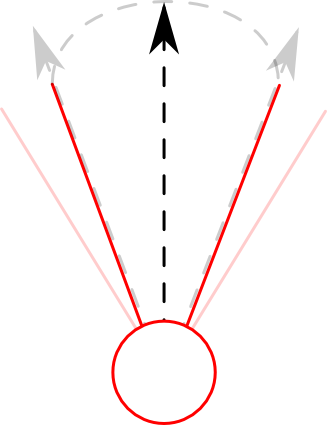 This approach is familiar with the people in CNC machining: the CNC bit is carving a path on a metal surface. Characteristic to this process are some terms: feedrate - this is actually the speed at which the metal is "plowed" by the rotating head of the tool and direction of advance - this is your vector indicating the direction the bit will advance from its current position.

There are some common-sense limitations: the faster the metal is eaten away, the less the change in the advance direction. Again, imagine a car through a curve. If it's going slowly, it can negotiate quite tight corners, while when it's going fast, it cannot without straying from that curve and leaving the road which spells disaster.

Your problem is 100% depicting these scenarios. The mathematical skills you need involve the cross product (rotate the current advance direction to allow the object to home in on a target), axis-angle rotation and a transfer function (which is nothing more than a function that decreases with the speed of the object and tells how big your cone's angle is - just like a tolerance).

Not the answer you're looking for? Browse other questions tagged mathematics vector movement or ask your own question.

27
How can I calculate the angle and proper turn direction between two 2D vectors?