How does 3D games work so fluent provided that each mesh's size is so big?

I'm surprised to find that each mesh takes at least 5-6 MB,

how can a 3D game be so fluent when there are hundreds of models?

I'm expecting it will simply go out of memory or something else that makes the game un-playable..

There are tons of tricks developers use to get the maximum out of their art assets.

The first is to optimize for polycount. Here's a great example: 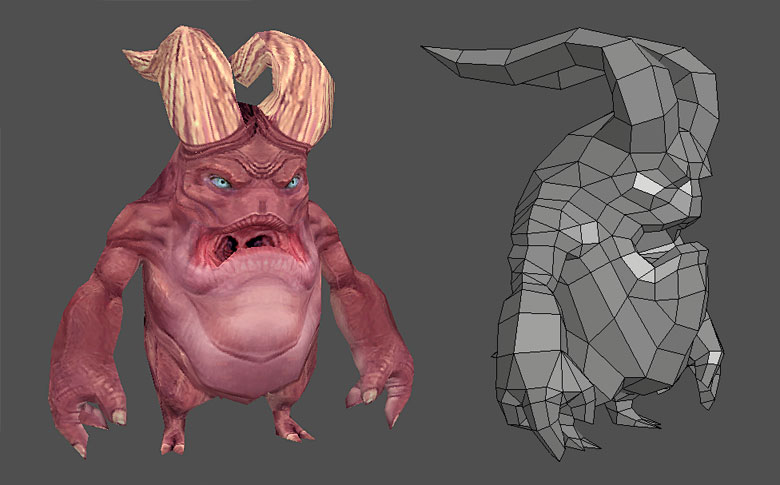 When you look at the texture model, it looks amazing detailed with probably like a million triangles. But the truth is, it only has the polygons shown on the right! In this case, an artist used the following process:

There is also tons of detail being added using just the diffuse texture.

Here's a great article on that: http://blog.wolfire.com/2009/11/Fast-object-instancing

For our space RTS, we actually had multiple representations for our ships:

This is a topic of research that is increasingly becoming more important. The basic idea is: why render something that is drawn behind something else? However, the intricacies can become quite complicated.

The most common approach is to label certain objects as "occluders". The rendering then happens in stages:

Finally, the mother of all memory savings: chunking. If you're playing in a large open world, it makes no sense to load everything into memory at once. Especially on platforms like the Xbox 360 and the PS3, where memory is worth its weight in gold. So a solution could be to divide your level into chunks.

When you turn a corner in an FPS game, the next section is loaded while the old one is thrown away. However, this affects the level design greatly and basically ensures corridors everywhere. There's also no silver bullet: what works for a game like Just Cause 2 doesn't work at all for a game like Fable 3.

For any game, you should look at what's important to you. If you're on PC, you don't have to care about memory that much. Most gaming rigs these days will have at least 2 GB of memory and 1 GB of video memory. That's a lot of models and textures! Keep in mind that any optimization you make for memory will usually have a price for processing. If you compress your textures to PNG for example, your files will be smaller than BMP images, but they'll take longer to load.

If you downloaded a model from an online source, it is most likely not in an optimized format. It will be in a format designed for use in a 3D modeling program, which may be much larger than the optimized/compressed mesh data that will eventually be sent to the game engine (usually generated by the game's level builder or other workflow tools). If the downloaded package includes textures, those also might not be compressed as aggressively as they would be for the final game data.

This is just 5-6 MB of GPU memory (textures, vertices or indices, does not really matter). With an average 256mb you can load dozens of such models into GPURAM. When model is rendered for more than 1 time it's usually just instanced (e.g. 12 identical cars in a racing game you see at once are rendered from 1 model with just color/position changed). And usually only player objects are fine detailed, with the rest of the scene using less details per unit of rendered surface.

Now, GPUs are very good at what they are designed to do - rendering tons of textured/shaded/transformed polygons. No wonder typical scenes can have million of polygons and few hundreds of megabytes of textures.

Optimizations kick in as well - when you cant see full-resolution texture it is rendered in smaller resolution (mipmaping + anisotropic filtering make it almost unnoticeable). Every model that is too far away is rendered in lower details (LOD). When you play MMO games only things that are in reach are loaded/rendered, everything else gets streamed when you get closer to it. Thats how 20gb WoW works.

P.S. In my experience with circuit racing games typical car models were 0.5-16mb. 8 per race. Scenery being another 30mb. Scenery objects were 5-10mb. HUD - another 5mb. Sound and everything else another 5mb. All-n-all just some 60-120mb. And you could cut that size by half just by switching to lower res textures.

Not the answer you're looking for? Browse other questions tagged 3d .

0
How can I inspect 3D model exactness?

8
Drawing very large slowly rotating planets
5
Replacing a custom 3D model format with something more standard
8
Height Map vs 3D Model Mesh
0
Android OpenGLES 2 ray picking, resulting coordinate jumpy in certain spots?
3
What is the range of RAM consumption for the typical 3D character in a video game?
0
Too much animation work for 2d characters. Creating 2d character animations by prerendering an animated 3d model?
4
What is wrong with my smooth shading code?
0
Fixed joints in 3D
0
Given a ray-intersect position on morphed mesh, how to compute that position at each morph target?