Maintain performance and precision with a large vertex buffer?

I have a world with 100s of simple objects on screen at once. Most objects don't have more than 40-50 vertices. The vertex coordinates for these objects are very large (planetary scale), so I use the 'floating origin' method to draw my data (actual coordinates are close to the origin and then you apply a translation out to where you want the object).

Based on the user's position, these objects are dynamically created and destroyed. Other than that, the objects are static. With my previous implementation, I was drawing these objects separately, and the result was significant slow down (I'm targeting mobile devices)... since the total number of triangles on screen is sort of trivial (even though there are many objects), I assume that the slow down is because of the multiple draw calls.

So I tried packing my objects into a single buffer to draw them all with a single call. This works, but I also use a 'floating origin' transform to position the geometry. The final transform matrix is calculated with the CPU to maintain precision and then sent to my vertex shader. The problem is applying the floating origin fix is CPU intensive:

I feel like I'm stuck. Are there any other ways to maintain precision I could use? Or maybe a better way to use the floating origin method? The problem is basically "how do I draw a ton of simple geometry with really large numerical coordinates with OpenGL ES 2?"... I'd appreciate any advice.

Just some clarification on the offset. The vertex should always be a valid float. The maximum distance a vertex can be from the origin is the maximum radius of the earth +/- few thousand meters. Assume 1 unit = 1 meter. The distances are never so large that they can't be represented by floats at all.

The objects themselves are things you find in a map on the surface of the earth: buildings/roads/etc. So relative to the coordinates being used, the objects are very small.

I'm not confident on the floating origin stuff, but here's my take...

When you calculate the MVP on the CPU where your vertex is offset, you're getting something you calculate with double precision that goes from an offset vertex position (say its 10.1,10.2,10.3) to the normalized opengl coordinates (I think thats +/- 1 in xy and 0-1 in z... I don't remember right now). You then pass the shader a vertex thats close to the origin, so no huge loss in precision, and a transform matrix that was calculated with double precision.

That's way better than sending the shader a vertex with much larger values since you lose a bunch of precision right away.

It sounds like your world is not entirely visible on screen at once (you mention creating/destroying objects based on the camera's position, and why else would you need such huge precision?). I would try to divide your world up into grid cells, where each object is entirely contained in a cell, and each cell is backed by its own vertex buffer. Because a cell has finite extent, you can use use normalized integral coordinates for the positions of your vertices, which will be more efficient (from a bits-per-precision standpoint) than floating-point vertices. You can compute a transformation matrix for each individual cell on the CPU (there shouldn't be that many cells, so it should be fairly fast), and the shader can apply it to every vertex.

This will work better if your game is 2D (or, at least, if your three dimensions aren't completely interchangeable), as you'll need significantly fewer cells to cover your world. You should be able to render all visible parts of your world with only four draw calls in the worst case (which should be negligible overhead compared to one draw call).

In order to not constrain the positions of your objects, you may have to treat the borders of your cell as loose (i.e. expand them by half the radius of the largest object; see the picture below). 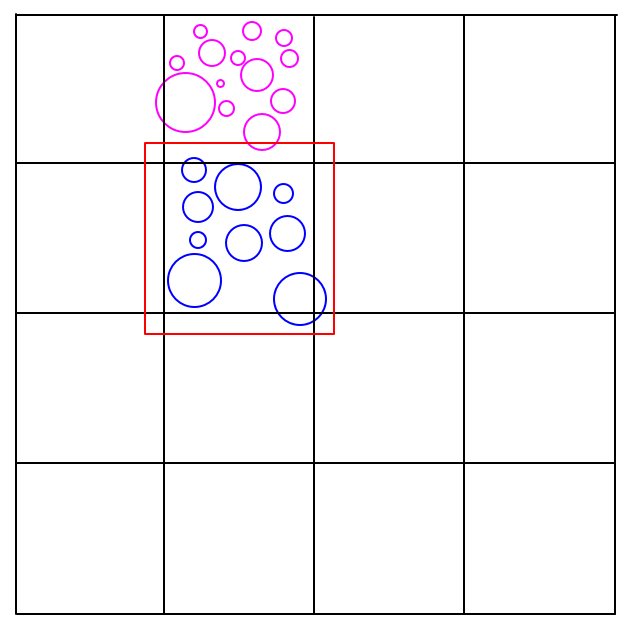 Not the answer you're looking for? Browse other questions tagged opengl-es2 or ask your own question.

5
OpenGL ES 2.0 texture distortion on large geometry
3
Proper way to maintain Vertex Buffer Objects
2
What is faster - loop in shader vs draw-call
0
What is the correct Order of Operations on OpenGL 2.0 Loading Texture in condense format?
4
OpenGL light appears to move with camera and changes with object rotation
0
drawing a horizon / sky in OpenGL ES 2.0
1
OpenGL: Does it make sense to use an Index Buffer With GL_TRIANGLE_FAN?
0
Concerns about how to efficiently implement sprite atlas