How can I create beautiful, random, abstract images? [closed]

To generate random, beautiful, abstract images – which algorithms are not too complex and give good results?

An approach I saw once was to generate a random mathematical function mapping x, y to a color. It was represented as a parse tree, built top-down, where each node was randomly chosen to be +, -, *, /, a trigonometric function, a constant color, or a variable (x or y); then any required subtree(s) were recursively generated. Then you evaluate the function for each pixel to get the image. It produced an interesting mix of structure (repeated elements, broken symmetries, etc.) and randomness.

Here are a couple examples. These use a slightly different algorithm than what I just described: they generate three separate random functions, one each for R, G, and B. Unfortunately the result tends to look like three independent images composited, which is why I suggested just using one random vector-valued function.

EDIT: I wrote up a slightly more detailed version of this answer as a blog post, including a Python implementation of the algorithm. 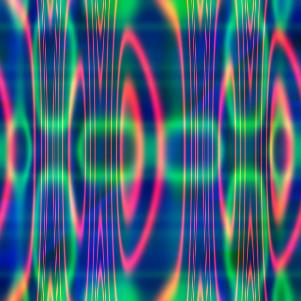 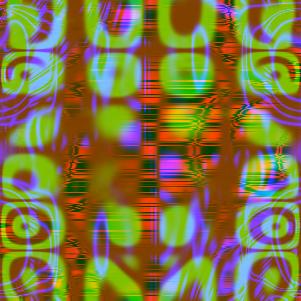 Using a cellular automata for simulation of a relaxion-diffusion equation might be right up your lines - the equations aren't really all that complex and the results are pretty striking. Have a look at http://www.cc.gatech.edu/~turk/reaction_diffusion/reaction_diffusion.html for some of the first papers on applying the results to computer graphics; http://www.sci.utah.edu/~allen/reaction-diffusion.html has some other fine examples, including for instance: 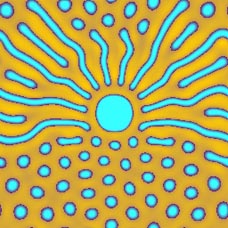 Karl Sims did some work about 20 years ago producing (among other things) wonderful abstract images, see here for details. Scroll about halfway down to see some beautiful samples.

Basically a syntax tree is created, mapping X and Y coordinates to colors, and then genetic programming was applied using exhibition (IIRC) visitors for scoring.

In the actual implementation described, the syntax trees are expressed and evaluated using Lisp. Section 4.1 in the linked paper lists the available functions, which are about half normal mathematical functions and half image processing/generation functions such as blur or bw-noise.

Not the answer you're looking for? Browse other questions tagged procedural-generation graphic-effects .