How can people recognize what engine a game uses, based off its graphics?

With many games, you can say "oh, that's the Unreal Engine, for sure", or "this was made with an upgraded Rockstar Advanced Engine". We can often recognize the engine used for a game just by looking at its graphics, disregarding user interface.

Why is this? All game engines use the same 3D rendering technology that we all use, and the different games usually have a distinct art style. What's left to recognize?

They will also have a uniform level of clarity in terms of constraints such as texture sizes and colour support.

Additionally the algorithms will be similar. Objects will be tessellated using the same algorithms. AI will make decisions according to the same decision-making architectures.

If the bump mapping is causing insane specular and reacts strongly to changes in lighting for example, you immediately start thinking Doom 3 engine. That's because that shader code is shared between every game using the engine. You wouldn't want to rip something like that out.

The technology is the same, but the rules that govern how the world actually looks (eg. lighting, tessellation, LOD , etc) are all written by the developer. The 3D rendering technology doesn't have that much to do with the visual quality of the things on screen. Even the rules for applying flat ambient lighting is left up to the developer (assuming you're not using Fixed-Function Pipelines).

You can make your OpenGL app look just like your DirectX app with often trivial difficulty. The underlying rendering technology really doesn't have that much impact except with regards to speed.

Engines often provide high-level abstractions, which leads to subtle similarities in the games that use them—a “side-channel attack” if you will.

It's funny because it's true, the lighting and further post-process effects can easily expose the underlying engine. 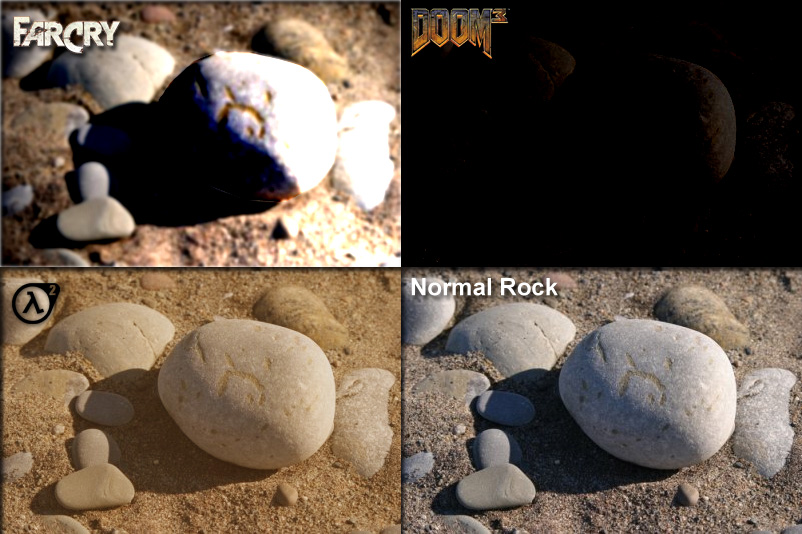 Animations also give it away. Every engine handles them in a different way and they also look and feel different while playing.

You can spot engine limitations on animations and tell which engine was used by that too.

I never knew you could really do that.

There are subtle differences in the engines and what they're good and bad at that is easy to spot from game to game.

The exact combination of these traits can often identify the engine.

Aside from the 3D graphics, we also recognize common shared behaviors in the game engine itself. There are a lot of little variables that go into every part of a game, and certain combinations, once set, remain a part of all games using that engine.

This is very apparent with mods or games that started as mods (hello Source engine games) because once the design is past the basics, rarely will anyone go back to tweak something like the acceleration rate of a jump. The effect of all those little variables is that the games "feel similar" but in a way that's hard to pin down.

You can tell Unreal games because they all use the same incredibly bad skin shader, and the same stupid "physics" puzzles.

A lot of what people say is a typical engine is actually more art related. Engines empower or impose restrictions on art assets but the design and execution of how things feel is largely an art issue. Take for example the faces in Oblivion; So many people were blaming the engine for the slightly less than convincing characters. This was clearly an issue with the art, or if not that then the section of Bethesda's code that blended faces together, rather than the whole 'engine'. Similarly, when people see shiny, grimy, steroid abusing space marines they'll think 'Unreal' but this is more of an art direction, rather than a facet of the underlying engine that displays that art. Even though different studios make grimy space marine games they'll often use unreal because it's been proven to be able to make that sort of game.

I think there are more subtle signs than what you see. Quake felt the same on OpenGL, Software, and PowerVR - despite unique looks on each.

For instance, the Quake-Engine games, to me felt more solid, whereas Build engine felt more flimsy, and Unreal felt kind of abstracted.

This is largely physics - and I suspect something to do with the game loop as well.

I've found that facial animations are usually a dead giveaway. There is a lot of variation and even with different art you can still see the same patterns in the textures.

I often recognize engines by their physics. Most notable here is the Source engine, particularly the part which picks up objects. You'll notice that in many games picking stuff up is similar. I believe this is due to the engine. I also agree that different engines handle light differently, so you can recognize them by that.

Not the answer you're looking for? Browse other questions tagged 3d graphics .

4
How can I improve the "smoothness" of a 2D side-scrolling iPhone game?
30
How can I make this style of 2D "glowing" graphics?
1
How to approach animations and OpenGL
0
How can I minimize visual clutter in an ASCII rougelike game?
1
Handling different renderers Y axis direction in a single engine
2
Screen objects sometimes not rendering
0
3D Asset Creation. "Joining" parts VS Hidden/Redundant Faces?