What are some good examples of exuberant in-game instructions for telling the player to repeatedly smash a button?

What are some good examples of exuberant in-game instructions for telling the player to repeatedly and quickly press a button or perform an action? I'm especially interested in examples in retro games (e.g., from the NES, SNES, and 1980-90s arcade eras), and I would love to see examples with text, graphics, or both.

To illustrate, here are a few examples of the type of instructions that I'm thinking of:

I'm working on a 2D iOS game with retro-style pixel art, and there's a point where I want the player to quickly tap on a sprite to complete an action. I have a serviceable starting point -- the word "TAP" flashing with an arrow repeatedly moving downward beneath it:

But it still doesn't feel quite right.

I would love to see some actual examples from the golden days of 2D gaming to use as reference material. I know examples abound, but I'm just struggling to think of any concrete ones at the moment.

Can you think of any examples of this type of thing in old games?

Sometimes, 2D can take a lesson from 3D. A graphical indicator that is reinforced by the game itself works better than the word "TAP" and an arrow. Here's a couple recent games that stand out in my mind for having good indicators of tapping.

Madworld (Wii): Okay, it's not actually tapping but one category of attacks could be repeated a certain number of times by shaking the controller. To indicate this, the designers put a picture of shaking controller on screen, complete with movement, and highlighted it with "action spikes" (for lack of a proper term, think classic "BAM!" bubbles from old comic books).

Batman: Arkham Asylum (360): Many actions like removing a vent grate used tapping. When Batman was ready to perform the action, the camera would change to focus on the action and an animated "A" button would show up as a prompt. If the player started tapping the button then stopped before the action was complete, Batman would either stop or, in the case of pulling down a wall, would slowly lose progress on the action. Either way, the game provided direct feedback in response to tapping.

As mentioned in other answers, older games didn't necessarily have any indicators for this sort of gesture. Just because your game is 2D doesn't mean you can't draw from the entire history of gaming to find a solution.

Here's an example I came across with a bit of Googling that gets the point across quite well, in my opinion. Either this, or just have the finger or a bouncing arrow and an outward-expanding target.

Kind of random example, but Power Rangers for SNES had a flashing GO with an arrow whenever you cleared an area to direct you to the next area. 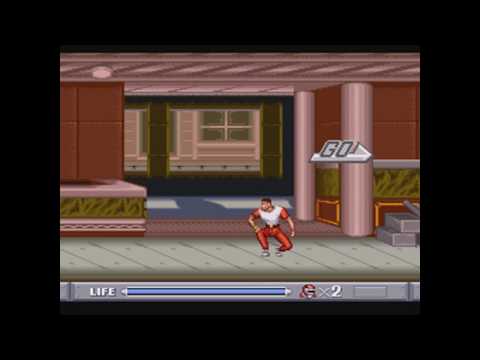 I'd suggest community wiki for this question, since it's not going to have a definitive right answer

I think that in "golden days" where were little to none in-game instructions. The already mentioned flashing "GO" is one of those rare examples. So, I'm not really sure if there is some established patterns for such animations back then.

P.S. I think your current implementation is pretty good. You can add zoom animation on TAP, or make TAP move with the arrow, it's a matter of personal taste I think.