How can I generate a 2d navigation mesh in a dynamic environment at runtime?

So I've grasped how to use A* for path-finding, and I am able to use it on a grid. However, my game world is huge and I have many enemies moving toward the player, which is a moving target, so a grid system is too slow for path-finding. I need to simplify my node graph by using a navigational mesh.

I grasp the concept of "how" a mesh works (finding a path through nodes on the vertices and/or the centers of the edges of polygons).

My game uses dynamic obstacles that are procedurally generated at run-time.

I can't quite wrap my head around how to take a plane that has multiple obstacles in it and programatically divide the walkable area up into polygons for the navigation mesh, like the following image. 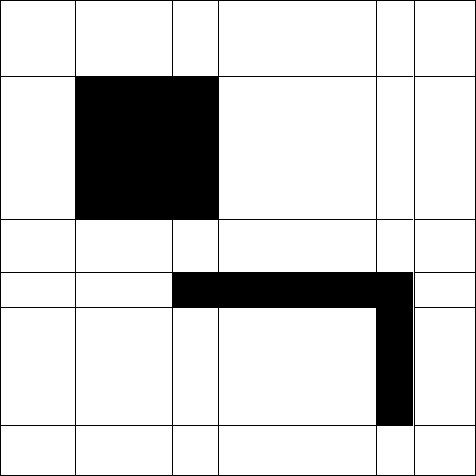 Where do I start? How do I know when a segment of walk-able area is already defined, or worse, when I realize I need to subdivide a previously defined walk-able area as the algorithm "walks" through the map?

I'm using javascript in nodejs, if it matters.

@Stephen - Long Comment - That paper looks like it might be worth a read when I have some time. Basically what I would have suggested is something along the lines of the Hertel-Mehlhorn Algorithm which is mentioned in the paper (a reference for this specific algorithm can be found here http://www.bringyou.to/compgeom/) with the addition of subdividing the map sides (outside boundary of the play area) some number of time to reduce the occurrences of multiple small triangles formed in the corners. Those small triangles can be problematic as they can end up being smaller than the thing you’re preforming path-finding for. The Hertel-Mehlhorn is for the reduction of the polygons produced by a triangular partitioning if you’re interested here is more on triangulation: http://www.personal.kent.edu/~rmuhamma/Compgeometry/MyCG/PolyPart/polyPartition.htm.

Also, if you’d rather not reinvent the wheel, I think this library will actually do everything you need: http://code.google.com/p/polypartition/. It preforms the triangulations and reductions with one of a number of different options including Hertel-Mehlhorn. It’s an MIT License which means it can be used for closed-source and commercial projects if that is an issue.

If you do decide to keep working on your own implementation, I’d love to see what you come up with.

Rather than a mesh, you might just consider a hierarchical A* approach. A mesh's biggest advantage is in dealing with game worlds that aren't grid aligned, rather than in reducing complexity from a grid.

With a hierarchical approach, you subdivide your world repeatedly (much like a quad tree), and generate connectivity information between the nodes. You can then quickly generate a path between large chunks of the world, and only use the high-resolution grid to path find within a larger chunk.

The hierarchical approach will give orders of magnitude better performance, while a mesh at best is only going to give you a small linear improvement.

The naive approach is to just divide your world into X by X larger grid aligned chunks, generate the connectivity info between them (e.g., is there a path between through chunk 2x1 from 3x1 to 2x2, and what is the distance of the average path).

Note that you may not always get ideal paths with this approach in some particular circumstances. Generating variable-sized layers of chunks alleviates the problem, but honestly it's usually just way easier to avoid the ever making makes with the problem paths and to rely on the fact that the player is highly unlikely to notice any enemies taking suboptimal paths except in the most degenerate of cases.

I think you might be overcomplicating this. You probably don't need to generate navigation meshes on the fly. Instead have a static navigation mesh for your base world.

Pathing around obstacles can be solved using steering behaviours (use obstacle avoidance). If on the off chance your obstacle is so large it fills or completely blocks off travel from one nav-poly to the next, then have some way of checking for this edge case and recompute the path between the poly you're currently in and the one you're blocked off from.

Not the answer you're looking for? Browse other questions tagged path-finding node.js automation navmesh or ask your own question.

5
How can I better implement A star algorithm with a very large set of nodes?
0
How can I locate empty space next to polygon regions?
2
How to predict future location of a Car in a Navigation Mesh based pathfinding system?
2
How to convert non-discreate data for discreate pathfinding?
1
Triangulation of “polygon with holes” for NavMesh
2
Dynamic navigation mesh generation algorithm
0
A* Quad/Oc Tree path-finding vs Navigation Mesh path-finding
1
Recursively calculate possible pathway on a grid depending on max walk distance