I have a cube-based world like Minecraft and I'm wondering if there's a way to construct a cube with fewer than 24 vertices so I can reduce memory usage.

It doesn't seem possible to me for 2 reasons: the normals wouldn't come out right and per-face textures wouldn't work.

Is this the case or am I wrong? Maybe there's some fancy new DX11 tech that can help?

If you only need per-face normals, and if your texcoords for a face are strictly 0/0, 0/1, 1/0, 1/1 (or similar to suit your layout) then you can construct a cube with 8 verts and either 30 (strip with restart) or 36 (list) indexes. Fetch the normals and texcoords using a constant array lookup based on SV_VertexID in your vertex shader.

Doing this means that you don't even need to include texcoords or normals in your vertex buffer, which will give you even more of a memory saving.

Going further, you could still go all the way to 24 verts per cube but also use instancing. Each cube would be a fixed-size in your vertex buffer (1x1x1) and you'd have a scaling factor and position (assuming your cubes don't rotate, a matrix if they do) as per-instance data. In the non-rotating case you've a once-off cost of 24 verts, but then each cube just needs 6 floats to fully specify. In the rotating case you're looking at 16 floats, but even that is a substantial saving (you're more likely to bottleneck CPU-side on matrix transforms in this case - for the non-rotating case constructing a matrix on the fly in your vertex shader - even if it's done per-vertex, is so stupidly fast that you don't even need to worry about it).

For per-face textures, just use a texture array. You need to ensure that each such texture in the array is the same size, of course, and you'll still need to break your current batch if the array itself needs to change, but otherwise it'll do the job just fine. Add a third texcoord to your vertex definition which defines the array slice to use for each face.

You don't need a GS with this, and it should run faster than using one as having the geometry shader stage enabled will impose extra overhead of it's own.

I've benchmark code in my engine that just draws a bunch of cubes using this method, and I can easily chew through over 300,000 cubes while still clearing 60fps, on a relatively low-end GPU, and without doing anything else to optimize the process. Admittedly I'm neither lighting nor texturing them, but I do have alpha blending enabled, backface culling disabled, and overall it balances against my "not doing anything else to optimize" part, so it should give you a reasonable idea of the kind of ballpark you can hit with this method.

I think the main optimization you can make, is based on the fact that not every cube will actually need all 24 vertices. In fact, the only cubes that need 24 vertices are the ones that are floating in midair, which is probably a rare occurrence.

In general, only generate quads for the faces that are in contact with air. This means that if two cubes are touching each other, you don't need to generate any vertices for the face where they're touching.

The image below demonstrates this concept, but in 2D for easier comprehension. In the image there are 11 occupied blocks (represented by the filled gray circles), which would normally require 4 x 11 = 44 edges to represent (4 because it's a square, not a cube). But as you can see, you only really need to draw the edges when they're in contact with an empty square, which in this case, is only 8 edges. 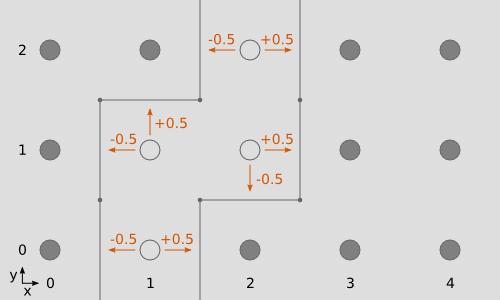 If such a simple example in 2D managed to reduce 44 edges to 8 edges, imagine the gains in a large 3D world...

This is the approach described in this article, which I recommend you to read, despite being aimed at OpenGL. The concepts should be pretty universal though.

You could also probably use a geometry shader to generate the vertices on the fly on the GPU, eliminating the need to store them in memory, but I don't have experience with that, nor do I know how well it would perform for a large world.

Not the answer you're looking for? Browse other questions tagged directx directx11 .

2
Is it possible to retrieve shader function names associated with a technique pass using the DirectX Effect API?
5
Should I use different input layout for meshes (vertices) with and without normal maps?
0
How to create two objects from one vertices array with translate?
0
Is it possible to use mipmaps with dynamic textures in Dirext 11?
3
How to Load and Apply a Cube Map with DDS Texture Loader?
2
Problem Rendering a Wireframe Cube and Grid with DirectX 11
1
Is it possible with DirectX11 to have pixel shader output an integer rather than float4?
2
DirectX11 - Texturing Terrain Mesh with Shared Vertices