I was toying around with infinitely scrolling 2D textures using the XNA framework and came across a rather strange observation.

with a small 32x32 texture and a sourceRect defined as:

I was able to scroll the texture across the window infinitely by changing the X and Y coordinates of the sourceRect.

Playing with different coordinate locations, I noticed that if I made either of the coordinates too large, the texture no longer drew and was instead replaced by either a flat color or alternating bands of color. Tracing the coordinates back down, I found the following at around (0, -16,777,000): 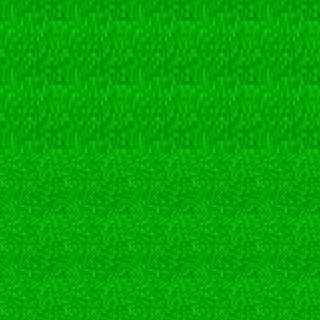 As you can see, the texture in the top half of the image is stretched vertically.

My question is why is this occurring? Certainly I can do things like bind the x/y position to some low multiple of 32 to give the same effect without this occurring, so fixing it isn't an issue, but I'm curious about why this happens. My initial thought was perhaps it was overflowing the coordinate value or some such thing, but looking at a data type size chart, the next closest below is an unsigned short with a range of about 32,000, and above is an unsigned int with a range of around 2,000,000,000 so that isn't likely the cause.

It seems to occur only at powers of two times that initial value, 16,777,216 * 2^n. The answer below by mh01 suggested to check the MaxTextureRepeat cap of my graphics card (a GeForce GTX 560). According to KluDX this cap has a value of 8192, and it's description indicates that texture coordinates are stored in 32-bit signed integers.

I think you've found some weird corner case bug, but you should never be in the scenario that your source rect has a coordinate like -16.777,000. It looks like you're not 100% sure what source rect is for.

Now for infinitely scrolling textures. As you've noticed you can keep updating the x and y coordinates of the source rectangle to have it keep scrolling. This happens because in certain texture modes (like Linear Wrap) a coordinate that would be outside the texture is placed inside the texture again by using the modulo of the texture size. So to counter the bug you've encountered we need to add this code ourselves so that the linear wrap algorithm never encounters such large numbers.

This should fix your problem :)

Check the value for MaxTextureRepeat in your DirectX Caps Viewer (you'll need the DX SDK installed for this of course).

Having been unable to come up with a better solution, I'm going to settle on this being due to floating point precision errors at such extreme coordinates. As Roy T. pointed out, you should never come across such coordinates in a properly set up environment, so it is effectively a non-issue, but hopefully this question will provide answers for those experiencing this issue.

Not the answer you're looking for? Browse other questions tagged xna 2d textures coordinates .

1
Texture swapping and 2d Drawing in Xna
5
OpenGL ES 2.0 texture distortion on large geometry
0
Performance of XNA 4,0 static vertex buffer / VertexPositionNormalTexture in F#
2
How to make texture size correctly in THREE.js?
0
How to make a texture appear the same way in a cube?
0
Stretching a tetragonal shape in a texture to a square object
0
Texture flipping behaviour