I've spent the last three days trying to work out how to rotate a sprite smoothly depending on the velocity.x value of the sprite. I'm using this:

The behaviour is what I required but if the velocity changes rapidly then it will look like the sprite will jump to face left or jump to face right.

I'll go into the behaviour in a little more detail:

I've read about using interpolation rather than an absolute angle to rotate it to but I don't know how to implement that.

I have a physics engine available.

There is one other way to get around this: to use += on the rotation angle. The thing is that I would then have to change the equation to produce positive and negative values then to make sure the sprite faces 0 once it reaches 0 velocity again. If I add that in now, it keeps the previous angle even after the velocity has dropped / is dropping.

Any ideas/code snippets would be greatly appreciated.

There are numerous ways of smoothening a rotation. If there is any physical meaning to it, we'll need to know what that is, but if you are merely doing it to make it appear less jerky, it is pretty arbitrary. Note that unless you know what the velocity is going to do in advance, any attempt to smoothen the corresponding rotation will cause it to lag behind to some degree, which may lead to weird oscillatory behaviour. It also prevents you from smoothly setting the rotation to zero simultaneously with the velocity hitting zero.

A simple way would be to make the rotation respond exponentially, i.e. use an angular velocity proportional to the difference between the sprite's current and target rotation. 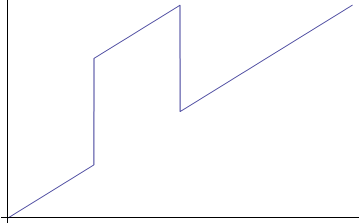 The plots below indicate an example rotation against time using various values for rotationspeed using this exponential smoothening method.

You may want to cap the angular velocity to zero under a specified magnitude. The integration method is very crude and given enough time to settle, the timestep will eventually be too large and the rotation will overshoot its target. The resulting oscillation might even consistently increase in amplitude. An example: 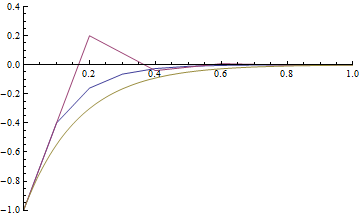 The yellow line indicates the intended behaviour. You can see the blue line (timesteps of 0.1) starts with the right slope, but isn't updated for a while. It's a little high, but doesn't cause any major issues. The red line has more time in between steps (0.2). By the time the slope is updated, the rotation has overshot its target.

There are more elaborate ways of tackling this problem, but you are somewhat handicapped by the fact that the target rotation might be changing too. The simplest way would be to specify a range around the target where the rotation is 'close enough' and should stop moving. How large this range should be depends on your timestep and maximum angular velocity, but I suggest some experimentation.

Not the answer you're looking for? Browse other questions tagged mathematics iphone cocos2d-iphone cocos2d rotation or ask your own question.

0
CubeRealm OpenGL rotation problems, need help. :\
6
Turning a sprite such that it rotates in the direction that's most efficient
0
Rotation based on x coordinate and x velocity?
0
(XNA) 3D Model Rotation Angles
1
Problems making a smooth character rotation
1
Unity Rotation - Object is rotating on Z, but should be rotating on X
0
Clockwise / counter-clockwise convention for Vector2.Rotate(float angle)
0
Angle between start and current rotation