I'm working with some splines which define a path a character follows (you can see a gameplay video here to get a better understanding of what's going on: http://www.youtube.com/watch?v=BndobjOiZ6g). Basically the characters 'forward' look direction is set to the 'forward' direction of the spline and when players tilt their phone left and right the character is strafed along its 'right' coordinate.

The issue with this is (rather obviously) in performance, interpolating over a spline to find the nearest position and tangent relative to the player is an incredibly costly operation. To get by this I cache a finite number of positions in what I call 'SplineDetails', the class is as follows:

I populate this with say 30 coordinates and I can give a rough estimate of a coordinate and 'forward' based on a position past in. It's not as accurate but it's much faster.

But now I'd like to make the system work better by estimating positions and 'forward' directions by interpolating between two of the cached points though I'm stuck trying to figure out some logic.

My first problem is, how can I determine between which two points the object is? Given each point can be placed at different intervals along the spline it could mean that two points in front or behind the object can be closer to the object. 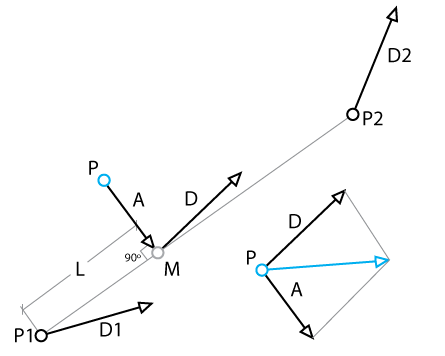 Not the answer you're looking for? Browse other questions tagged c# mathematics vector splines .

21
Determine arc-length of a Catmull-Rom spline to move at a constant speed
1
Compute world position by walking N units along spline?
2
Intelligently move aircraft using curves
9
How can I find the tangent and normal at an interpolated point on a Catmull-Rom/Hermite spline?
2
Determine if AI can traverse a given spline
0
Spline type to achieve a specific result
4
Moving a 2D object along circular arc between two points
0
Unity - Set rotation of object using angle between two points?