It would seem to me that vector art is more efficient in terms of resources/scalability; however, in most cases I have seen artists using bitmap/rasterized art. Is this a limitation put on the artists by the game programmers/designers? As a programmer I think vector art would be more ideal, since it allows for scaling up resolution without having to recreate the art, creating really large graphics or causing graphics to become blurry.

The questions: why aren't more people using SVG/AI to create 2D game art? Would it actually be preferred (and who prefers it)? Are bitmap graphics a standard or a limitation (or maybe neither)?

Background: I am working on an engine, and I had some kinda cool ideas for vector based graphics; however, I don't want to piss off artists in the future.

I guess this is more a question centered around pragmatism and developing games.

Unlike other art forms, vector art requires extremely high precision, making it unsuitable for many art styles. Basic shapes and such are easy using Vector art but it's just a pain to add small details which would be really easy to paint. So its kinda restricted to very simple "symbolic" styles. For everything else painting just works better.

What vector art is suitable for, is icons and design and there you won't find many artists who would use something different.

By the way: Scalability isn't really a problem for raster graphics either, painting in 10x resolution isn't that much of a difference than painting in the resolution it is going to be displayed. Something which is done quite a lot nowadays (often advertised as "HD-Graphics").

Vector graphics are usually more efficient than raster graphics for storage (ie. the filesize is smaller) but considerably less efficient for performance (ie. how much time it takes the computer to draw the image).

In fact, there are a number of 2d games that do use what amounts to vector art; Capcom's Ghost Trick:Phantom Detective, for instance, essentially generates its in-engine characters as vector graphics. (To be more precise, I believe they're given as flat-filled polygonal regions, which in this case amounts to the same thing). More broadly, polygonal models in general can be thought of as 'vector' data - they represent the vertices, edges and faces of an object - as opposed to (screen-resolution) 'raster' data, so in some ways most 3d games are using vectorized data descriptions.

But I suspect your question is more about 2d art, and there several factors come into play. As Mr. Beast says, small details make vector art quite a bit trickier to construct; imagine something like a grenade belt on a character, where even a bit of clever copy-paste of individual grenades still isn't going to save a whole ton of time on the effort. I think the bigger issue, though, is that vector graphics take some control away from the artist; as you note, vector art may look substantially better scaling up, but the real issues are at lower resolutions, where the fiddly details of rasterization can substantially change how an image looks. Imagine a character's eye, for instance; the outer boundary might be an oval no more than ten or twenty pixels across and possibly just a small handful of pixels in height. At those resolutions, how the vector data - be it lines, circular arcs or Bezier curves - is rasterized becomes a critical issue, and unless your artists can work directly in-engine - which essentially means creating an entirely new vector drawing program - then they have a hard time guaranteeing that the appearance of their objects in-game will match the appearance in their tool. What's more, just appearing correct at one resolution is no guarantee whatsoever that they'll appear correct at any other; again, the scaling works well when you're dealing with objects where the details are dozens or hundreds of pixels in size, but as you get down towards smaller-scale features then your scaled rendering runs into exactly the same rasterization details.

That said, vectorized rendering isn't always inappropriate, and it can often be a stylistic choice to excellent effect. But it's not a panacea for the issues you raise with raster graphics, and it raises new issues of its own too.

I believe that it's mostly a combination of tradition, tools and technology, and expectations, which all feed back into each other.

The interesting thing about these points is that you can see that things are changing. Maybe the use of vector graphics will pick up in the near future. Modern graphics hardware is well-suited to vector graphics, so the issue is really just about creating a good technology chain to get art into the game and onto the screen.

Imho it's the difference in approach... it's more about building your art rather than drawing it. I prefer vector art for it's ease of changing, reusing, scaling and the cartoony feel I can create with ease. Most 'trained' artist prefer a drawing and painting approach while a lot of graphic artist like to use vectors.

Check out my blog: http://2dgameartforprogrammers.blogspot.com.au/

It's helpful to start at the beginning and read the earlier tutorials first. :)

I read an article called Icon Design: Bitmap vs Vector a while back which shows the clarity of detail that gets lost when scaling a vector image. It's not that any loss occurs, it's that it can be finely tuned as a bitmap.

Take a look at this example of a printer icon (the circled image is the master in each case): 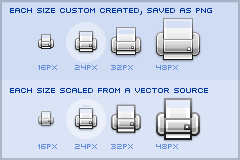 The sweet spot is to scale using vector then adjust with raster. So I guess what I'm saying is that they could be using vector but the end result is raster.

It's primarily a technical issue that most companies won't use pure vector art in their games. I know many artists who make their creations in Flash or Illustrator, only to pump out a rasterized image that gets slapped on a polygon sprite. It's just a technical hurdle that most large companies aren't too keen on trying to figure out.

Below is an example of an animatable character, made in AI, with about 13 moving parts. It would be great to be able to use this, but we had to painstakingly place each piece inside of their own separate image. The only benefit was that we had these assets ready to be scaled for any marketing art. 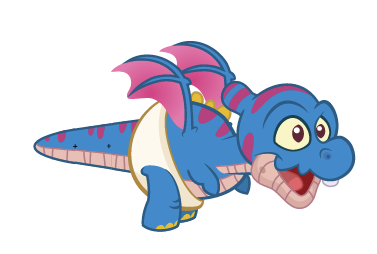 Another reason it may not be more popular is that the EPS format has different standards that AI. So all the bells and whistles artists like to put into their images get stomped out when converted as EPS.

Ultimately, I don't know what it takes to implement vector art into a game, but I know for a fact that most engineers I've worked with opted to just spit out a png instead of deal with it.

I can't speak for everyone, but from my personal experience, vector art programs (read: Inkscape, the only one I've tried) are harder to use and aren't quite as intuitive as bitmap graphics programs. Everybody understands the paintbrush and the bucket. Curves are harder.

Not the answer you're looking for? Browse other questions tagged 2d architecture animation art .

40
Learning To Create Better Art (2D Games)
25
How do I teach my artist to do art for games?
3
Why is concept art not signed by the author?
0
What level of use can I give to these third person IP based art assets?
0
Are metal slug art assets free use?
0
"High" Quality Pixel Art Games (varying the scale factor)
29
Why don't most major game engines use gifs for animated textures?