Do I need to roll my own polygon segmentation algorithm to automate Box2d body creation from a tile map?

Before re-inventing the wheel I figured I'd ask:

I'm working on a tile-based 2d-maze level generator for cocos2d + box2d. The idea is:

However, I'm at step 3 and so far, I'm thinking of solving this step with something along the lines of a flood/segmentation/magic wand algorithm. That is, from step 2 I get the graph's nodes which translate in Tiled's XML to, for instance, a 2d array where walls are marked with a number and open spaces are 0s. This is in the cvs non-compressed XML representation for instance.

So what I need to do now is sort of solve the convex-hull problem for a bunch of points (the non-zero numbers in this 2d array), but actually creating different polygons. I also need to then break any concave ploys into convex, but that can be done easiest with ear-clipping and, should I decided to get fancier, Delaunay or something.

Let me illustrate with images: 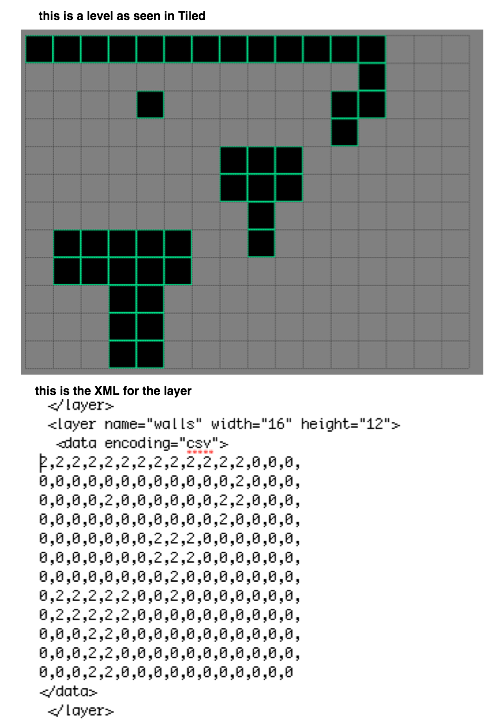 And in the next image you can see A the set's convex-hull (approximately), and B what I'm trying to achieve (concave subsets of the hull): 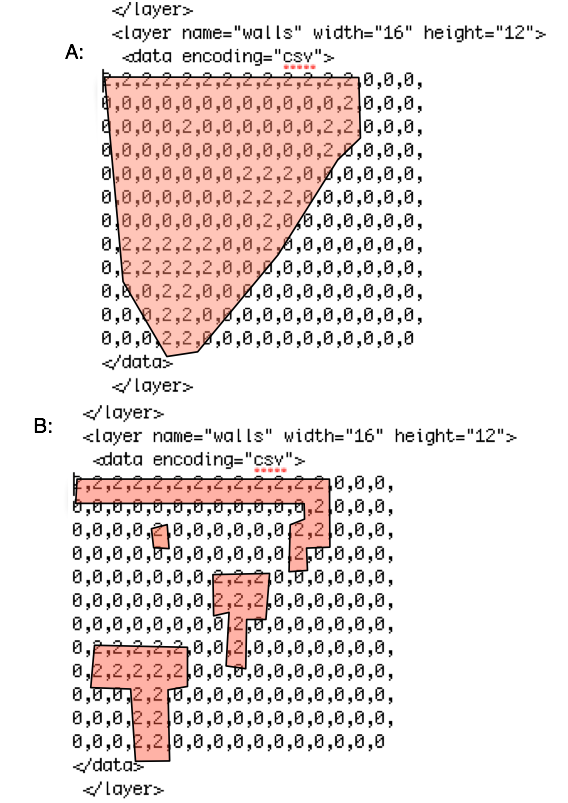 That is, I need to be able to distinguish separate polys. Of course, but for one, these also turn out to be concave which Box2d will not like. But like I said, I'll turn them to convex sets afterwards.

The question is, is there anything built-in or tested/tried that I could just grab and use or do I need to implement my magic wand algorithm?

I'm also open to different approaches all together.

Make a square body for each tile. Box2D scales up very well when using a large number of static bodies.

If you are very concerned, you could make rectangular bodies along each scanline. This would result in 14 bodies for your sample picture, down from 42 if you make a body per tile. This generates only convex polygons so you don't need more postprocessing, and is also faster than just a flood fill.

(But because of the spatial partitioning algorithms involved it's really not that big a deal - 14 to 42 is only two powers of two.)

Not the answer you're looking for? Browse other questions tagged collision-detection box2d cocos2d-iphone or ask your own question.