How can I convert a 2D bitmap (Used for terrain) to a 2D polygon mesh for collision?

So I'm making an artillery type game, sort of similar to Worms with all the usual stuff like destructible terrain etc... and while I could use per-pixel collision that doesn't give me collision normals or anything like that. Converting it all to a mesh would also mean I could use an existing physics library, which would be better than anything I can make by myself.

I've seen people mention doing this by using Marching Squares to get contours in the bitmap, but I can't find anything which mentions how to turn these into a mesh (Unless it refers to a 3D mesh with contour lines defining different heights, which is NOT what I want). At the moment I can get a basic Marching Squares contour which looks something like this (Where the grid-like lines in the background would be the Marching Squares 'cells'): 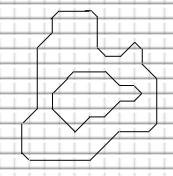 That needs to be interpolated to get a smoother, more accurate result but that's the general idea. I had a couple ideas for how to turn this into a mesh, but many of them wouldn't work in certain cases, and the one which I thought would work perfectly has turned out to be very slow and I've not even finished it yet! Ideally I'd like whatever I end up using to be fast enough to do every frame for cases such as rapidly-firing weapons, or digging tools.

I'm thinking there must be some kind of existing algorithm/technique for turning something like this into a mesh, but I can't seem to find anything. I've looked at some things like Delaunay Triangulation, but as far as I can tell that won't correctly handle concave shapes like the above example, and also wouldn't account for holes within the terrain.

I'll go through the technique I came up with for comparison and I guess I'll see if anyone has a better idea. First of all interpolate the Marching Squares contour lines, creating vertices from the line ends, and getting vertices where lines cross cell edges (Important). Then, for each cell containing vertices create polygons by using 2 vertices, and a cell corner as the 3rd vertex (Probably the closest corner). 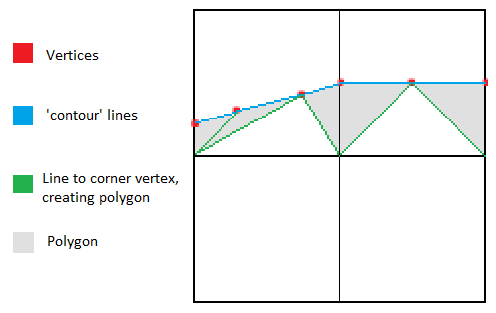 Do this for each cell and I think you should have a mesh which accurately represents the original bitmap (Though there will only be polygons at the edges of the bitmap, and large filled in areas in between will be empty). The only problem with this is that it involves lopping through every pixel once for the initial Marching Squares, then looping through every cell (image height + 1 x image width + 1) at least twice, which ends up being really slow for any decently sized image...

I haven't worked with 2D physics engines before, I'm not sure exactly how the collision mesh is supposed to look.

If it's simply a set of 2D triangles, then you should look into triangulation methods. For example, constrained Delauney triangulation.

Which is a good thing when it comes to rendering these triangles at least, and may or may not be good for collision detection as well.

A constrained Delauny triangulation incorporates fixed edges, which would be your detected edges. This library may provide what you need

Not the answer you're looking for? Browse other questions tagged collision-detection physics terrain image dynamic-mesh or ask your own question.

4
Dynamic Terrain Triangulation
10
How to efficiently render a large terrain mesh?
2
How to do collision detection on marching cubes terrain?
0
How to get a 2D vectorial terrain from an image for Java collision detection?
3
How to convert a premade mesh into voxels so I can use algorithms such as marching cubes
6
How do I store destructible terrain that characters can walk on?
0
Ray casting through terrain mesh + Octree ( Mesh collision )