I found debugging games especially hard for some obvious reasons. It's hard to monitor some internal values in dynamic, conditional breakpoints helps somehow, but only to detect some specific conditions. You don't get information that lead you there. Sometimes you just want to monitor some value, sometimes value are hard to interpret in their internal form (say a current path calculated by AI).

So I'm thinking about implementing kind of debug layer which will draw this information above gameplay in real time. The question is how to do it in most convenient and reusable way.

I'm currently thinking to make interface say IDebugInfo, implement it in all entities which I want to monitor, and add then to debug layer (it's a DrawableGameComponent) via GameServices. The debug layer will draw them. It can be turned on or off in realtime by removing/adding debug layer.

Does this sound good? I'm almost sure this was done many times already, is there some proved patterns?

Update. So, I implemented it this way: 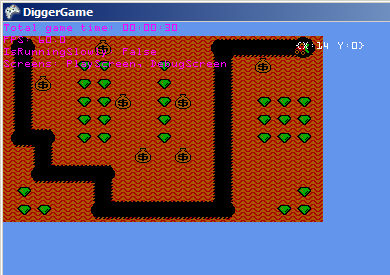 You can collect draws from all your methods and then draw them all at once. (Because in debug draws you don't really care about ordering)

This is a component that will do the drawing

It's not really a good design but for debugging it's great.

you could just do a key binding (that is not normally used in your game) that modifies the game state, and then in some section of your screen print out specific information about what is going on. Keep in mind that I have not worked with the debug layer, but I have done this with output.

remember that somethings are easier to see what is going on numerically (seeing that valueX is changing/not changing in this way), and other are easier to debug visually (it looks like that model is interpenetrating the wall)

the biggest thing is figuring out is what information is really needed for you to know that everything is working or not.

When I have done this in the past (was designing debug for keyboard) I mapped AI states/positions to one button, another button showing bounding volumes, another button outputting positions, and bounding data, and a final button that displayed every collision that was not purely Y (at one point I had things falling through the world, and had to just revers the bool check, but that a different story)

Not the answer you're looking for? Browse other questions tagged xna architecture debugging or ask your own question.