Does anyone know the technique they used to create their levels (using rayman origin as an example)? I'm strictly speaking of the floors and walls. Doesn't look like tiled based. What is the workflow that would be needed for a non-tiled based game? I am trying to implement something like this (below) but I am stuck between two ways of doing it 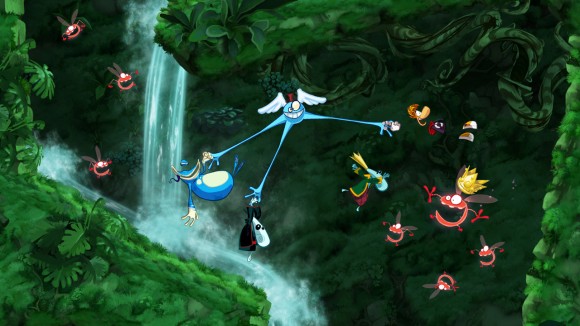 First: Just have art assets and get/set positions of them, similar to tiled based but the objects would be more detailed (with different positions for the x and y)-seems slightly tedious, I could save the locations to a text file and load it from there.

Second: I have seen an article which I can't find, but the game dev pretty much drew the base level (the walls, floors) and then added a bit of imagery on top of it. So in the picture below, they would've just drew green ledges and walls, then cover them up with leaf-like assets. - I would really like to implement this option, as I could for example, draw a straight line for a hill, then cover it up with some assets, but the collision would still be the straight line

Check out the article linked to below, it might be what you're looking for...

Not only does this approach allow arbitrary x, y locations for objects, it also lets you have depth. Depth lets you do parallax effects, plus focal depth (farther items out of focus).

This is the style used in Braid and Aquaria, both of which have an "almost" 3D look. The game you mention may be done the same way. Even scenes where objects are animated in a 3D way may just be animated sprites.

I can give more insights on this since I worked on it. We were indeed using a level editor similar to what's described in Tim Holt's answers: levels are built in 3D but all objects are flat, and the projection is orthographic.

But there is more than "a set of 2D sprites". The way UBIart worked at that time (I'm sure it evolved quite a lot today with the upcoming release of Rayman Legends) is that we had roughly two different sets of entities:

The key point was that level editing was done straight in the game engine: any change in layout or look could be tested in-game straight away.

If you're interested, you'll find some pretty interesting articles on Gamasutra:

Not the answer you're looking for? Browse other questions tagged level-design levels or ask your own question.

1
PNG image as a level map for 2d game

4
3d level creation for small teams
25
Making walls in tile-based games: what am I missing?
1
How do I simplify a 2D game grid for level management while keeping its by-pixel features?
0
Level/Map file creation and processing with OpenGL