How to compute the 2D equations of 3D circular arcs?

I'd like to obtain these equations for the ellipses produced by the perspective projections of (3-dimensionally transformed) circles.

This is useful for rendering in 2D contexts which provide curve primitives. I'm using HTML5's canvas, so I get Beziers, arcs, and quadratic curves. 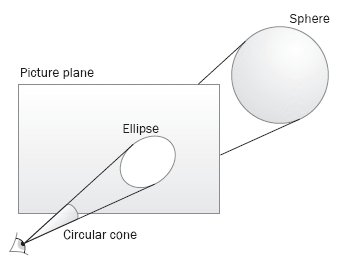 However if I want to draw my sphere using circular wireframes, that projection-cone is no longer a circular cone. So it's not your traditional conic section anymore.

How to deal with this?

I wouldn't bother with heavy maths to get that ellipse's equation. Here's what I recommend:

Of course you've got line segments instead of arcs, but drawing arcs in an HTML5 canvas kills performance, so I wouldn't recommend it. Just subdivide your sphere until the result looks OK.

There's a bunch of 3D engines for Javascript that implement software rendering. For instance, you could have a look at Three.js for inspiration.

That's if you want to do it all yourself, on the CPU. You could also use WebGL, there's already a tutorial for that. Browser support is not very broad yet, but it's supposed to be the future.

However if I want to draw my sphere using circular wireframes, that projection-cone is no longer a circular cone. So it's not your traditional conic section anymore.

The perspective projection of a 3d circular disk is also an ellipse, as long as the disk is entirely in front of the camera. (If the disk crosses the camera plane, it projects into a hyperbola).

There are several methods for computing the ellipse parameters of a perspective-projected circle, using geometric constructions, or using analytic / algebraic methods. I've found the algebraic methods easier to implement.

Perhaps the simplest algebraic method is to put your disk into matrix form [1], run it through the perspective transform [2], and then extract the center and axes from the result [3]. A simple alternative to the first two steps is to compute the projected ellipse equation by taking 5 sample points from your disk, projecting them to the image plane, and converting the 5 points directly into the ellipse equation coefficients [4], then proceed with extracting the center and axes from the coefficients [3].

There is a nice complete code example of computing the ellipse using a transform on ShaderToy [5] which has a blog post attached describing the math and an interesting application of it, undistorting text. [6]

And just in case you want to go the simpler route of drawing the sphere's silhouette ellipse (rather than wireframe disks), Inigo Quilez wrote a nice article deriving the math [9] and he provides a complete implementation [10].

I already answered the question How to project a 3D circle/ellipse to 2D? by providing the JavaScript implementation below. 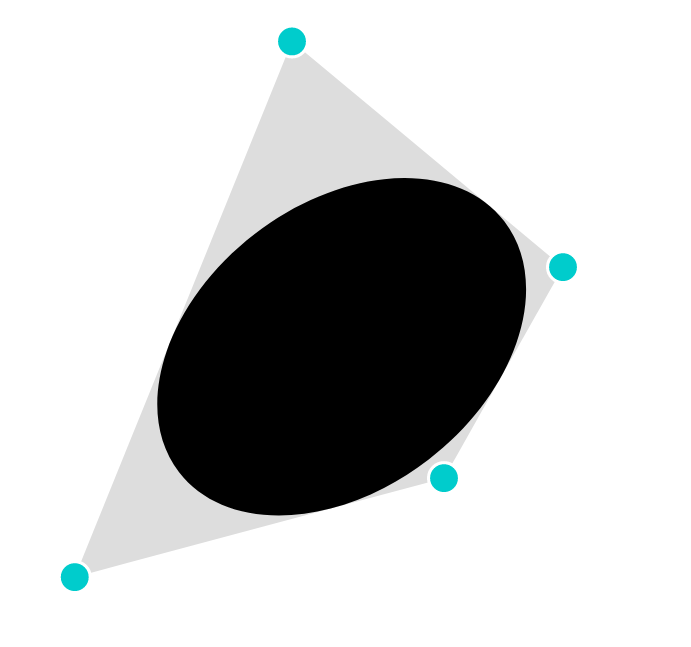 Christopher Brierley Jones describes the process on his website how an ellipse can be fit perfectly into any convex quadrilateral.

So one way to compute the 2D equations of 3D circular arcs, without discretizing into line segments first, is to project the bounding rectangle and the extract the ellipse parameters from the resulting convex quadrilateral as described by Jones.

You can see a live demo here

Now if you want to project a sphere instead of a plain circle from 3d to 2d the steps would be:

Not the answer you're looking for? Browse other questions tagged rendering html5 projection perspective curves or ask your own question.

4
Unwanted highlight on far side of objects near the edges of the screen when using orthographic camera
1
How to project a 3D circle/ellipse to 2D?

5
How to do perspective projection “parallax” but without changing the scale or offset of objects?
3
OpenGL GL_LINE_STRIP produces arcs with visible line edges
1
Where is the error in my perspective projection implementation?
4
How to compute point in view space from depth?
1
How to send data from compute shader to vertex shader
2
Finding the normals of the planes of a View Frustum
3
How to render a field of view of over 180 degrees?