Consider a shooter and a target. My question is if there is any realistic approximation of calculating with which probability the shooter hits the target.

Neglecting the weapon and shooter skill, I guess the first order approximation should be that the probability to hit would be proportional to 1/r^2, where r is the distance to the target.

The motivation to this relation comes from using the idea that the area of a sphere centered at the shooter decays as r^2. So, the probability to hit a target should be, in worse case scenario, decaying as 1/r^2.

I've tried Googling some relation for any weapon, but I didn't find any...

Does anyone knows more information about this topic? Is this approximation valid?

More on the question: I'm considering a tactics game. In particular, I would like to model the shooting between two units (so, not a FPS game, the player does not aim, it issue orders). To do that, I'm considering that the unit has some experience, the weapon has some accuracy, and the environment (foggy, vegetation, etc) effects the overall accuracy. Before working some difficult model, the simplest model to test is considering all factors constant, and accuracy only depending on distance.

The question is how does this accuracy should depend on the distance. My first guess would be a 1/r^2 decay. But, has well mentioned on comments, this looks like a very rapid decay.

Your approximation basically dictates shots are landing on a part of the surface of a sphere, determined by angle; the target area within that surface is a constant; the probability distribution is constant within the surface and zero elsewhere.

Gajet has already given a number of good reasons why some of these assumptions fall flat, but holds on to the same inaccuracy model: a bounded error in angle. The result still falls off with r^-2, but with a small constant.

Say the shooter has a maximum spread of 5°. He has a chance of firing between a 0° and 1° error, but the area of the ring between 4° and 5° is much larger than the area of the ring/circle between 0° and 1°. Larger errors have a larger probability of occuring. Increase the error any further, and the probability suddenly drops to zero, because we're out of the five degree limit. That doesn't seem very realistic.

A more accurate representation would be to have a guassian distribution of angular error, i.e.: A(ϕ) = sqrt(a/π) exp(-a ϕ²). The variable a can be used to include the shooter's skill etc. Note this solution is one-dimensional. If your target is very tall compared to its width, you might omit the vertical error altogether and just assume the shot landed at the correct elevation. Alternatively, you can run the calculation twice and multiply the result, assuming the target is roughly rectangular.

To get from the probability function to the actual probability of hitting a target, we integrate the function A and end up with an expensive error function - which is actually called the error function: p(ϕ) = erf(ϕ sqrt(a)). The angle ϕ equates to the angle between the targeted point and the target's edge. In terms of target size s and distance r: p(r) = erf(arctan(s/2r) sqrt(a)). This function is plotted below for a target of size 1 and accuracy values of a=2 and a=10. 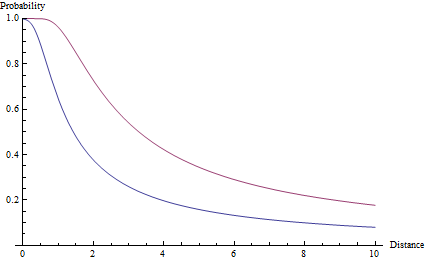 Note that unlike a falloff of r^-2, the probabilty neatly stays below one, no matter how close the target is. In fact, even a target at exactly zero distance can be missed, due to the extremely small probability the error is more than 90°.

Like I said before, the error function is quite expensive, but its argument ϕ sqrt(a), doesn't vary all that much for any sensible shooter scenario. We can do a lot better by evaluating part of the Taylor series instead and capping the result. First, we map x = arctan(s/2r) sqrt(a), then evaluate: 2 x - (2/3) x^3 + (1/5) x^5 .... Omit or add as many terms as deemed necessary, but keep in mind an even number of terms will cause unwanted behavior for low distances. Plotted below is the real error function, compared to the first three non-zero terms of its Taylor series. 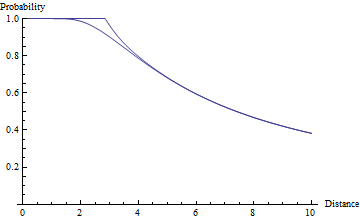 As a final note, this is purely mathematics. Throw in a couple of sine functions, random coefficients and logarithms and your game might be equally fun.

The probability certainly is a function of 1/r^2 but does not fall off as fast as 1/r^2 itself. Let't do a simple math, and for the ease of calculation I shall first go with a 2D shooting which will result in 1D error in shooting. The target always has a same width, for example we know that target has a width of one meter. And we also know that while shooting the gun can miss the target with at most 5 degrees. here is a figure showing the situation:

Now look at these three states. assume that they have h1, h2 and h3 distance from the corner. Based on these values and the angle, we can calculate how much the distance is at those state. It's calculated as simple as h*tan(10/2)*2 (as shown in figure 2). 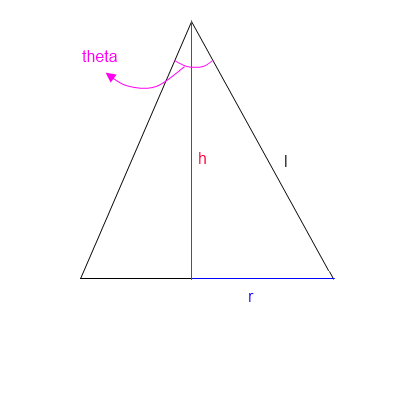 At other hand we know the target itself is 1 meter wide, so as long as that value is less than one meter we will always hit. after that part it has a probability of "target surface"/"hit area" which is equal to 1 / (h*tan(10/2)*2). Note that we can always assume all of target surface is inside cone of fire. it's doesn't really affect game-play that much but ease calculations very much!

For this, you need a defined concept of "inaccuracy". What is inaccuracy? How does it work? If you code an AI which shoots and it computes the exact path every time, then obviously the inaccuracy is 0 over any distance.

Any shooting AI defines the perfect path first, and then adds aiming inaccuracy. This inaccuracy is entirely defined by you, and that definition is necessary before any probability can be computed.

14
How to implement a shotgun in a game?

3
Designing Drops system - How and where chance of drops are defined?
2
Turn based battle and formula
3
Detecting interesting kill in a 2D shooter
3
The simplest but most effective and intuitive way to implement Accuracy and Dodge chance in an RPG?
1
Bartle taxonomy formula
123
Is it unethical to make a game AI that is secretly non-competitive?
5
Browser RPG fight calculation formula
0
Best way to implement a to hit formula based on provided stats