How can I orient a circle relative to the position of a 3D object?

How can I orient a circle that has a position to a 3D object? If I have a 3D object which is a hemisphere, I would like to let the circle be underneath that hemi-sphere and whenever the hemisphere moves, the circle move with the same angle and position, and underneath it.

In other words, I would like to attach a 2D circle to a hemisphere and parallel to it.

You need to have an orientation defined for your object/entity. This is usually an unit vector in 3D, v=(vx,vy,vz). If you have an object oriented bounding box, then you can use that to determine where the "bottom" part of your object is. If not, just consider a "safety" distance/radius from the center of your object. Say this distance is d. Then one can simply find where the circle's center is by using the object's center, the v direction and the d distance:

What to do next? Rotate the circle in such a way that its local Z(up) axis points in the same direction as the v vector. How? Find the rotation that aligns Z with v:

The RodriguesRotation is the general rotation matrix against a w axis by an angle theta. In the picture below, the black arrow is the orientation, the red circle with red orientation arrows is what your circle should look like, and the crimson line is the d distance offset from the object's center. 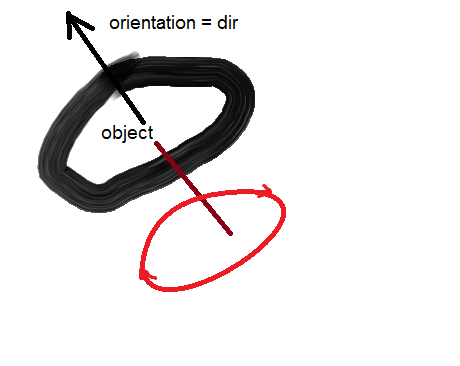 0
Directional and orientation problem
7
Square game map rendered as sphere
4
How do I position a 2D camera in OpenGL?
1
How do I orbit one object around another?
7
Atmospheric scattering and sky geometry
1
Infinite / Treadmilling Hexagonal Grid
3
Shader - Calculate depth relative to Object
2
draw two models changing the MVP matrix (android opengl)
1
How can I implement a side scrolling seamless fog shader?