By "2.5D" I mean the art style in games such as Roller Coaster Tycoon, Age of Empires 2 or Fallout 1 and 2: 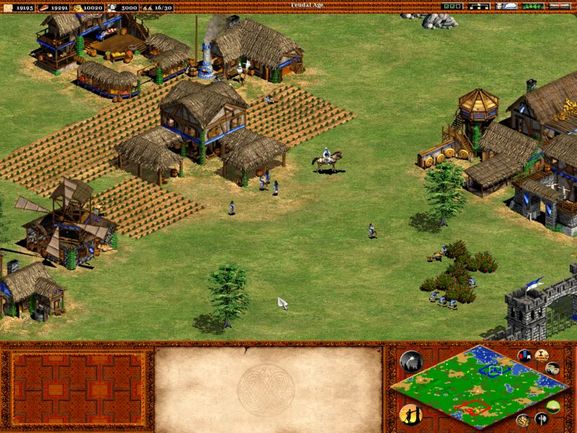 Everything in the games appears to be created with a "pixel art"-like tool. Am I correct?

How are the moving characters are created though? Take AoE2: For much of my childhood I was convinced that the soldiers, villagers and other characters were 3D!

Assets like these can be created in any 3D package.

They are imported into a game by pre-rendering the models at specified angles, using orthographic projection in the viewport. The pixel effect probably is a side-effect of rendering at a low resolution with little or no anti-aliasing. The spritesheets generated by these will be ordered in such a way that the application can mathematically compute which frames apply to which angles and animation frames.

In Age of Empires 2, you can easily tell that the structures are pre-rendered 3D assets, especially by how they have such a low frame rate of animation. The reason for this is simply disk and memory consumption. Animating large images like those at a high frame rate will bloat the asset sizes tremendously, on disk and in memory. The smaller sprites, e.g. the villagers, can have much higher rates of animation, as they are comparatively small and less intensive. This is also why the units in the game have only 8 directions of rotation, as accommodating all potential rotations and animation frames will, again, bloat disk and memory consumption (not to mention rendering time too).

There are some games however that do use a 3D method for rendering certain objects. Take C&C Tiberian Sun and C&C Red Alert 2 for example. The infantry and structures use pre-rendered sprites, like AOE2. However the vehicles use a 3D rendering technique called "Voxels", which are essentially 3D bitmaps that are rendered in real-time, which is why they have such a large variety of angles and positions, whilst still having that "2.5d" look.

Somewhat Unrelated: Also I believe that 2.5D normally refers to 3D rendered games that use 2D gameplay mechanics. I may be wrong in this case, but that is how I refer to it. :)

Not the answer you're looking for? Browse other questions tagged 2d art rts 2.5d .

9
How do I create a 2.5d parallax effect?
1
How to create a similar 2.5D art style character

12
How were art assets created in the late 16-bit/early 32-bit era?
6
Storing and Finding Art Assets
4
Are 2D art assets typically created at their intended in-game display size?
1
How to create a similar 2.5D art style character
0
What is isometric game?
2
Proper and easier way to make isometric animated art
0
Are metal slug art assets free use?
1
Techniques to make 3D models to look like oil paintings
2
How can I achieve a similar look to this "2.5D"-ish art style?