Vectors and corners of squares

I am having some problems with some vector math.

Imagine a square and coming from each corner of the square is an invisible vector, which starts at the square's centre and ends at the edge of the screen.

I would like to say that if you touch within one of the areas then something happens.

Is there a simple way to do this?

Translate and scale the input coordinates to have the origin in the center of the screen and have vectors towards the corners of the screen at 90° angles. Then, to exclude the inner square, use:

Where s is the size of the square. Then, to identify the area, use:

I would just use two point-in-triangle tests for each of the areas. 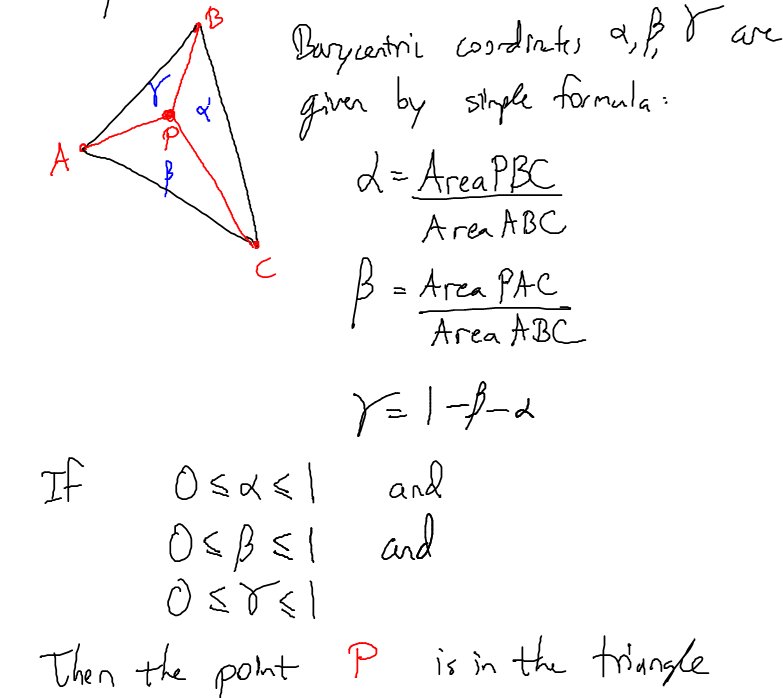 I would suggest that the easiest way is to look at the angle between one of these vectors and where the user touches. You can use the dot product method to work this out; see here.

The dot product will give you the angle between the chosen vector and the user's touch point (you may have to translate this touch point into the squares local coordinate space). Then if you use the top left vector for the comparison, you will find that if the angle is less than 90 then the user touches quadrant a, if it's more than 90 but less than 180, then it's quadrant b and so on.

Edit: Sorry dot product doesn't give you the angle, it gives you the cosine of the angle. So you have to do inverse cosine on the result. You can also use atan2 to get the angle.

The simplest way to order the tests is to first test the touch point against the inner square; knowing that it's not inside simplifies the other ones. This test is straightforward: if

then your point is in the inner rectangle. How you want to handle the edge cases with respect to points in the center box is, of course, up to you - be careful with them, though!

Likewise, you can do similar tests for the other three regions using the appropriate lines from inner to outer corner. These tests may look complicated, but they're pretty straightforward and they have a lot of advantages: they'll work no matter where your inner box is (as long as the box is entirely contained inside your screen), whatever the dimensions of your screen and inner box are, and they don't involve anything more complicated than a few multiplies - they can even be done in purely integer math if need be.

Not the answer you're looking for? Browse other questions tagged android mathematics vector or ask your own question.

5
What is a good way to determine if a vector is between two other vectors in 2D?
2
Smooth vector based jump
1
Movement constrained to the faces of a cube
5
Matrix represents same rotation with different euler angles
4
Is there a quick way to determine if a vector is in a quadrant?
1
How can I exclude my enemies from spawning in certain zones generated at random?
1
Aim assist (GoldenEye/Perfect Dark)
2
C++ alternative to vector for arbitrary number of objects using pointers
4
Scrolling background after firing projectile
1
How can I calculate the new vector of an object trying to push into (move along) the ground?