What would be a good filter to create 'magnetic deformers' from a depth map?

In my project, I am creating a system for deforming a highly detailed mesh (clothing) so that it 'fits' a convex mesh. To do this I use depth maps of the item and the 'hull' to determine at what point in world space the deviation occurs and the extent.

Simply transforming all occluded vertices to the depths as defined by the 'hull' is fairly effective, and has good performance, but it suffers the problem of not preserving the features of the mesh and requires extensive culling to avoid false-positives.

I would like instead to generate from the depth deviation map a set of simple 'deformers' which will 'push'* all vertices of the deformed mesh outwards (in world space). This way, all features of the mesh are preserved and there is no need to have complex heuristics to cull inappropriate vertices.

I am not sure how to go about generating this deformer set however. I am imagining something like an algorithm that attempts to match a spherical surface to each patch of contiguous deviations within a certain range, but do not know where to start doing this.

Can anyone suggest a suitable filter or algorithm for generating deformers? Or to put it another way 'compressing' a depth map?

(*Push because its fitting to a convex 'bulgy' humanoid so transforms are likely to be 'spherical' from the POV of the surface.)

Edit: Here is an image/diagram rightly suggested that illustrates what I am trying to achieve.

Also, I should say since this question was posted I worked a lot more on this problem, and though I never solved how to the get the deformers I did eventually decide that depth maps for this were unsuitable as:

Not that these were unsolvable, but the other solution, which involved collision testing in kernels running on the GPU, resulted in higher quality results and was much simpler, even though it may not be as fast.

I still think this questions problem is interesting though and would be interested in any answers as I am sure there are situations where it would be preferred. 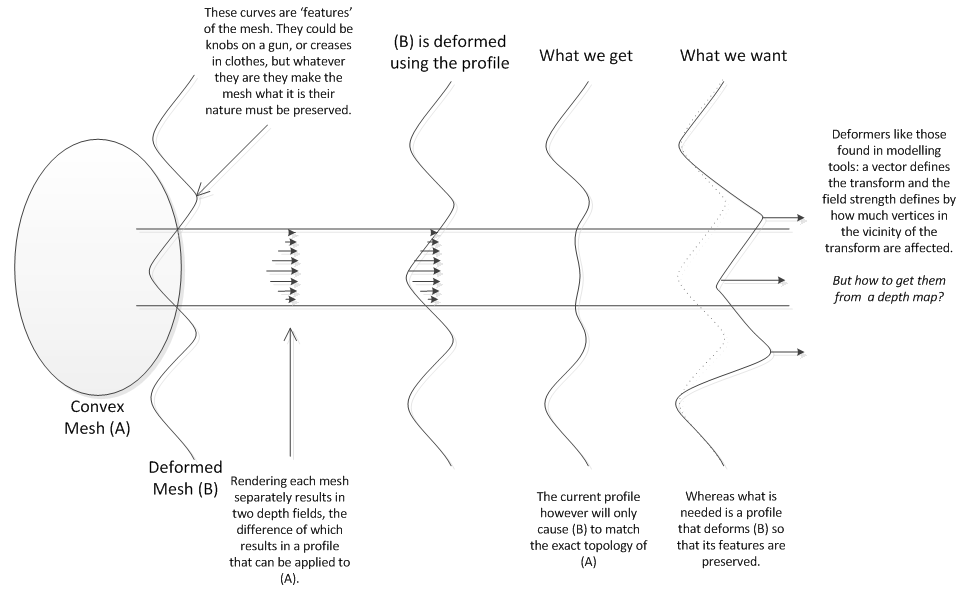 You have a depth map, which I assume is simply the distance between the convex mesh A and the neutral deformed mesh B, and you have surface normals of mesh A.

What you're missing is weights (or groupings) of how each vert on mesh B affects its neighbors. For example, when the central vert gets moved it should also drag along its neighbor verts by some amount (percentage) if they are in the same group.

If you have a group of verts affect each other 100% they will all end up pushed out by the farthest amount from your depth map as if they were all part of an unbendable steel structure that moves as a unit, set at 50% this structure may act more like thick rubber sheets and 10% like form fitting plastic wrap because each vert barely affects its neighbor (which is what you have now.

Obviously there's some blending and merging of values going on. Like @Gajoo said, "what is wrong with moving the whole shape?"

Not the answer you're looking for? Browse other questions tagged physics depth-buffer filtering or ask your own question.

4
Drawing a depth map properly
5
What is a simple deformer in which vertices deform linearly with control points?
0
Accesing depth buffer from shader
0
OpenGL Reconstructing Position from Depth
3
Strange depth map projection
2
Is it possible to create a homemade depth buffer?