With XNA, I am displaying a simple rectangle which is projected onto the floor. The projector can be placed at an arbitrary position. Obviously, the projected rectangle gets distorted according to the projectors position and angle. A Kinect scans the floor looking for the four corners. Now my goal is to transform the original rectangle such that the projection is no longer distorted by basically pre-warping the rectangle.

My first approach was to do everything in 2D: First compute a perspective transformation (using OpenCV's warpPerspective()) from the scanned points to the internal rectangle's points und apply the inverse to the rectangle. This seemed to work but was too slow as it couldn't be rendered on the GPU.

The second approach was to do everything in 3D in order to use XNA's rendering features. First, I would display a plane, scan its corners with Kinect and map the received 3D-Points to the original plane. Theoretically, I could apply the inverse of the perspective transformation to the plane, as I did in the 2D-approach. However, since XNA works with a view and projection matrix, I can't just call a function such as warpPerspective() and get the desired result. I would need to compute the new parameters for the camera's view and projection matrix.

Question: Is it possible to compute these parameters and split them into two matrices (view and projection)? If not, is there another approach I could use?

Since vector algebra is GPU friendly, normalizations and dot products can be used to find the four corners of the original plane as follow: 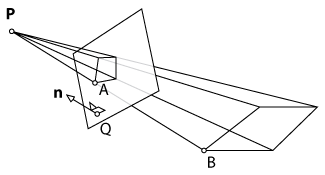 Given the projector point (P), the projected point (B), one arbitrary point on the plane that contains the distorted rectangle (Q), and the normal vector to that plane (n), the point of intersection (A) of the line from P to B, and the plane is given by

Not the answer you're looking for? Browse other questions tagged xna 2d 3d projection kinect .

9
Understanding the perspective projection matrix in OpenGL
1
A controlled trapezoid transformation with perspective projecton
6
Transform world space using Kinect FloorClipPlane to move origin to floor while keeping orientation
8
Isometric graphics with fake perspective
0
How would you design a transformation matrix to project absolute coordinates to any orthographic projection desired?
1
How does XNA/MonoGame project 3d to 2d?
1
3D camera - window resolution relation
0
Figuring out if two objects overlap on screen