I'm prototyping some 2D game concepts with XNA and have added some basic keyboard inputs to control a triangle sprite.

When I press key up the sprite accelerates in it's current facing direction, when I release the key it brakes down.

For rotation, when I press left/right keys I rotate the sprite.

This would simulate thrusters on a classic space shooter like Asteroids.

I'm adding an image to describe the behaviour I'm after and some code samples of how I'm doing things at the moment. 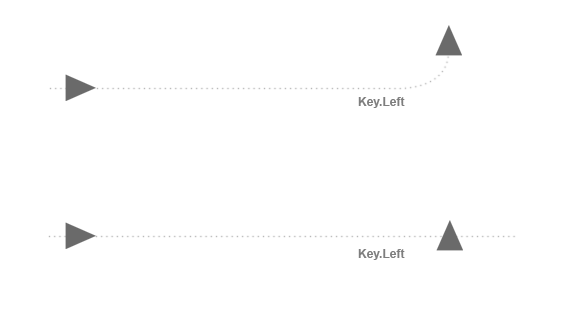 This is my player struct, holding information of the sprite.

This is how I'm currently handling thrusting / braking (when pressing/releasing key up) (simplified, removed some bounds checking etc):

And when I rotate the sprite left and right:

This runs in the update loop, keeps the direction updated and updates the position:

I am following along various beginner tutorials and haven't found any describing this, but I have tried some on my own without success. Do I need to change my velocity and acceleration fields to Vectors instead of floats to accomplish this type of movement? I realise my Angle and the Direction vector is currently tied together and I need to disconnect these somehow to be able to rotate freely without changing the direction of the movement, but I can't quite figure out how to do this while keeping the acceleration/decceleration functional.

Would appreciate an explanation rather than pure code samples.

You're actually very close to the behavior you want. You just need to decouple the direction the player is facing and the direction he's moving.

The only value the angle of the player should affect is the thruster force. Each frame, you'll calculate the total acceleration vector of the player as the sum of the forces that are acting upon him, in this case, just your thruster:

Then you can apply the acceleration to the player's velocity:

Notice that the acceleration is multiplied by deltaTime (the amount of time that elapsed since the last frame) twice. This is because the units of acceleration are meters per second squared (assuming meters are your unit of length).

Finally you can move the player by the velocity:

What's important here is that the direction the player is moving is always the direction of the player's velocity, and not the angle the player is facing. The velocity will change over time when the thruster is being used, giving the player the sliding behavior reminiscent of Asteroids that you're looking for.

Not the answer you're looking for? Browse other questions tagged xna sprites rotation or ask your own question.

0
Move Sprite in direction of rotation

6
Turning a sprite such that it rotates in the direction that's most efficient
9
Xbox thumbstick used to rotate sprite, basic formula makes it “stick” or feel “sticky” at 90 degree intervals! How do you get smooth rotation?
1
How to I get a rotated sprite to move left or right?
0
Ship Controls modeling Real life Physics
0
Problem with sprite direction and rotation
4
Translating an object in the rotation direction
0
Rotate sprite direction Cocos2d
1
Understanding SpriteBatch.Draw overload XNA
0
Can't set object's local rotation like rotating from gizmo in the scene
0
Two Points Rotating Around Circle?