In a 2D platform game, how to ensure the player moves smoothly over sloping ground?

I'm developing a physics engine for a 2D platform game. I'm using the separating axis theorem for collision detection. The ground surface is constructed from oriented bounding boxes, with the player as an axis aligned bounding box. (Specifically, I'm using the algorithm from the book "Realtime Collision Detection" which performs swept collision detection for OBBs using SAT). I'm using a fairly small (close to zero) restitution coefficient in the collision response, to ensure that the dynamic objects don't penetrate the environment.

The engine mostly works fine, it's just that I'm concerned about some edge cases that could possibly occur. For example, in the diagram, A, B and C are the ground surface. The player is heading left along B towards A. It seems to me that due to inaccuracy, the player box could be slightly below the box B as it continues up and left. When it reaches A, therefore, the bottom left corner of the player might then collide with the right side of A, which would be undesirable (as the intention is for the player to move smoothly over the top of A). It seems like a similar problem could happen when the player is on top of box C, moving left towards B - the most extreme point of B could collide with the left side of the player, instead of the player's bottom left corner sliding up and left above B. 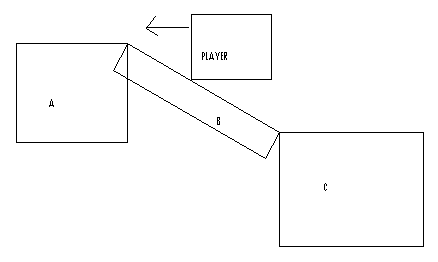 Box2D seems to handle this problem by storing connectivity information for its edge shapes, but I'm not really sure how it uses this information to solve the problem, and after looking at the code I don't really grasp what it's doing.

Any suggestions would be greatly appreciated.

These edge cases are numerous. Good fun platformers do not behave in any kind of physically-accurate manner, and the control and behavior that players expect after years of "perfect" platformers like Mario are incredibly difficult to implement with general techniques like you get with Box2D or other physics engines. Most good platformers do not use any kind of generic physics or collision response in their player controllers.

Regarding your specific question, the best solution is to stop using boxes as your ground. Use a series of connected line segments (a hull). That allows the collision detection engine to only focus on the actually walkable surfaces and not look at the "fake" edge that exists between A-B and B-C. That is what Box2D does, in fact. The shapes are used to generate the outward surfaces, which are linked together to form a hull.

You need this even in tile-based games, or in situations where you have two AABB objects next to other acting as the floor. The collision engine will pick up those vertical edges and cause the player to catch on them. There are hacks that can help, but not eliminate the problem. The solution is to just have a single line segment representing the surface rather than a full 2D box.

You can generate the hulls in the generic case by clipping the polygons against each other and joining the clip points into an edge list.

Since your example includes a slope and you're mentioning restitution and other physical properties, I'll point out a few other problems you're going to notice soon, which further illustrates why generic collision detection and response does not work well for platformers. First, try standing on the angled platform, jump up, and then land. You will likely notice that the character will "slide" a bit when landing. The problem is that the contact normal you're generating is usually going to be pointing out from the angled surface. Then, when resolving the collision, the player is pushed out in that direction. Even though the character was fall straight down, he'll be pushed up and a little to the right when landing, resulting in the slide. This can be hacked by taking the relative velocities into account, or by just hacking it so that the contact normals for static surfaces are always snapped to be axis-aligned.

The second problem you're going to notice, which is much harder to fix, is what happens when you try to run quickly down a ramp. The player is going to "hop" down the ramp. This is very visible even in most AAA games today. It not only looks silly, but if your game requires the player to be footed on the ground to jump, it makes it difficult to run down a ramp and jump halfway down, because the player is only contacting the ramp during a small portion of the time spent going down it. A simpler fix is to simply do some ray casts when the player moves, and snap the player position down to the nearest surface (if it's very close to the player) if the player is not jumping and was previously on the ground.

You may also find that the player launches into the air when running up a ramp if you try to model velocity, friction, and restitution on the player as if he were a normal rigid body. The player's movement should be constrained to horizontal movement unless falling/jumping. Of course, if you play older golden-age platformers, you may notice that the player's horizontal velocity is often constant between horizontal and sloped surfaces. This needs to be taken into account when walking up/down slopes as well.

There's going to be a number of other odd corner cases you'll eventually run into, too. If you're trying to make a good platformer, it's really just best to implement a platformer player controller separate from physics and hardcode the movement and control behavior you want, rather than relying on generic physics and collision response algorithm.

I think both problems could be solved by treating your boxes, for collision response purposes, as if they had rounded corners (of a similar radius to your numerical error). This will make the effective combined surface of the meeting corners between A and B, and B and C, smoother.

Thus if PLAYER moving left hits the corner of A, the collision normal would be diagonal rather than purely rightward, so allowing continuation of the left-and-up motion.

However, a more typical solution, on reviewing what I know of platformer physics, is to make the player a more highly rounded shape, and leave the terrain alone. In particular, consider making the player's shape a capsule (stretched-in-the-middle circle (2D)/sphere (3D)) — then your collision normals will naturally be nearly vertical, eliminating any catching problem.

You say you're using a collision algorithm specifically for OBBs, but you should still be able to, after finding an OBB-OBB collision, use a further test against a shape which is entirely within the OBB.

Not the answer you're looking for? Browse other questions tagged 2d physics platform or ask your own question.

8
2D Platformer Collision Handling
6
Collision response for 2D racing game
5
Collision Detection with SAT: False Collision for Diagonal Movement Towards Vertical Tile-Walls?
0
2D Rectangle Collision
1
Unity2D: Apply gravity to some items, when everything else is gravity-free?
0
2d Collision detection response equation doesn't work
20
How can I detect the player being crushed in a 2D platformer?
2
How do I calculate vehicle rotation when two car wheels are on the ground to simulate gravity?
0
Swept 3d capsule intersection with AABB, what am I actually supposed to use to accomplish this?