I am writing a 2D game where my game world has x axis running left to right, y axis running top to bottom, and z axis out of the screen:

Whilst my game world is top-down, the game is rendered on a slight tilt: 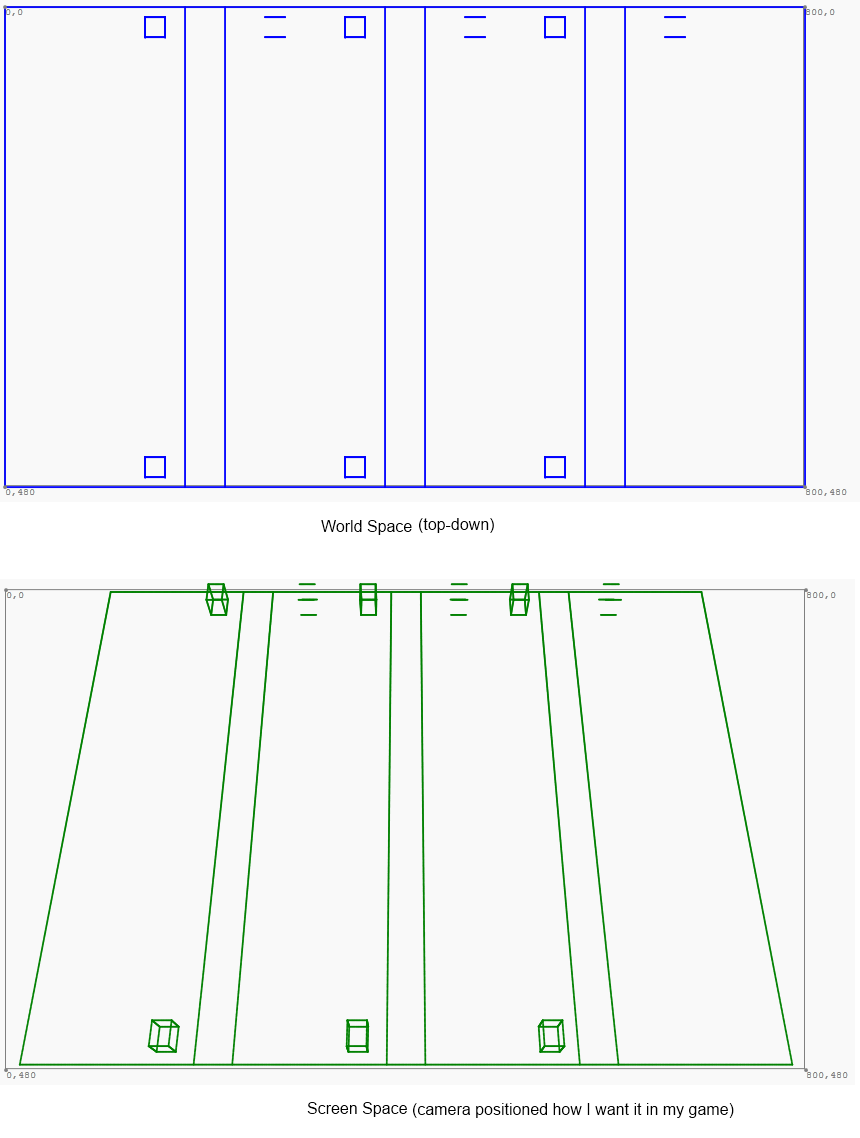 I'm working on projecting from world space to screen space, and vice-versa. I have the former working as follows:

The NegateY() extension method does exactly what it sounds like, since XNA's y axis runs bottom to top instead of top to bottom. The screenshot above shows this all working. Basically, I have a bunch of points in 3D space that I then render in screen space. I can modify camera properties in real time and see it animate to the new position. Obviously my actual game will use sprites rather than points and the camera position will be fixed, but I'm just trying to get all the math in place before getting to that.

Now, I am trying to convert back the other way. That is, given an x and y point in screen space above, determine the corresponding point in world space. So if I point the cursor at, say, the bottom-left of the green trapezoid, I want to get a world space reading of (0, 480). The z coordinate is irrelevant. Or, rather, the z coordinate will always be zero when mapping back to world space. Essentially, I want to implement this method signature:

I've tried several things to get this working but am just having no luck. My latest thinking is that I need to call Viewport.Unproject twice with differing near/far z values, calculate the resultant Ray, normalize it, then calculate the intersection of the Ray with a Plane that basically represents ground-level of my world. However, I got stuck on the last step and wasn't sure whether I was over-complicating things.

Can anyone point me in the right direction on how to achieve this?

I think your idea is pretty much spot on! First calculate a ray for your cursor using both the near plane and the far plane as Z values for your 2D coordinates (i.e. use 0 and 1 for your Z coordinate). Here's an helper method to handle that:

Next you'll need to have a Plane instance that matches your ground. The easiest way to calculate it is to use the constructor that takes three points on the plane, and passing it any three vertices from the ground object. Example of how to calculate the ground plane:

And finally find the intersection point between the ray and the plane using this method. You can use the out result parameter in order to calculate the intersection coordinates like in the example below:

You might have to do something about the NegateY method too but I'm not sure where.

Not the answer you're looking for? Browse other questions tagged xna c# matrix projection screen .

24
How to deal with differences between 2D screen coordinates and Cartesian coordinates
5
How can I calculate where my camera can be to avoid showing something outside a region?
1
Finding furthermost point in game world
0
Xna Equivalent of Viewport.Unproject in a draw call as a matrix transformation
1
OpenGL ES, orthographic projection and viewport
0
Find world matrix
1
Replicating a worldspace sphere on screen space
1
2D World Mouse Coordinates - Matrices
3
Deproject Screen To World Coordinates (Unreal Engine 4.15)