How do I approach this collision model?

This is the game level prototype I have already implemented. It has few objects per room to allow me to finally add some collision detection/response code into it. 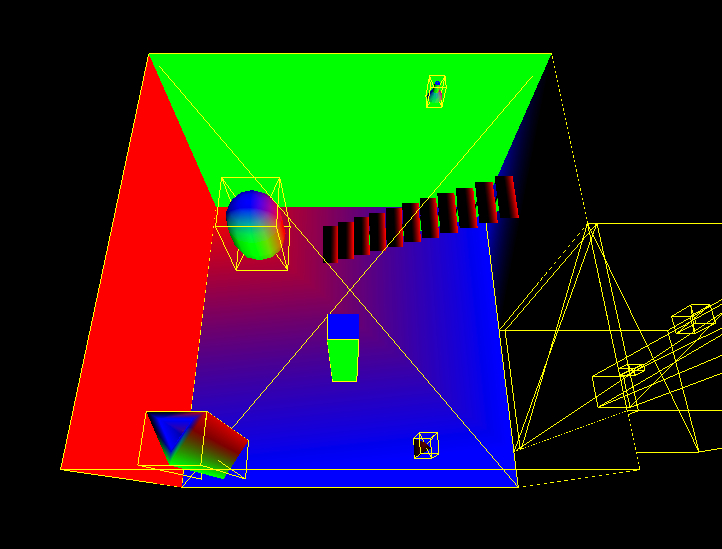 As you can probably see, every object inside has it's own AABB, even the room itself has AABB. Also my player is inside the Room's AABB.

My player will be exactly inside the room, so he would have to collide correctly with those AABBs, so that when he hits any of those objects inside he get's a proper collision response from those AABB's.

Now I would like to hear from you what kind of collision approach should I choose in here?

How do I approach this kind of stuff:

How do you do this ?

Ok, here is how i approached this model: PSEUDOCODE

First, your room should not have an AABB like that. Give each wall an AABB (which will effectively be planes). Otherwise you have to deal with inverted logic, where some objects push out of each other and other objects must be contained. You don't want that duality.

Second, to fine proper plane normals with AABBs, you can use a simplified Separating Axis Theorem test to find the plane of least penetration, which will be your normal. The second you start dealing with any other shapes though (spheres, capsules, OBBs, arbitrary convex hulls, etc.) that will no longer give satisfactory results.

You can use a modified GJK (Gilbert–Johnson–Keerthi) algorithm or MPR (Minkowski Portal Refinement). The latter is a bit more direct for physics needs, but the former can be a bit simpler to understand. I would recommend getting a grasp on GJK first and then looking into MPR.

A nice link to explain the basics of GJK for collision detection (but not manifold generation) is here: http://www.codezealot.org/archives/88

A decent link I just found on MPR is here: http://motleycoder.com/?p=66

Are you asking the how you would do the math? It's simple really.

To test "collisions" (intersections) between two AABBs all you need is the minimum and the maximum coordinates of the boxes you're testing.

There is only one problem; your room is an AABB, so the aforementioned method will not work. So you could just have the floor as a AABB instead, or possibly look at convex collision.

Not the answer you're looking for? Browse other questions tagged c++ collision-detection mathematics .