How do I determine the draw order in an isometric view flash game?

This is for a flash game, with isometric view. I need to know how to sort object so that there is no need for z-buffer checking when drawing. This might seem easy but there is another restriction, a scene can have 10,000+ objects so the algorithm needs to be run in less than O(n^2). All objects are rectangular boxes, and there are 3-4 objects moving in the scene. What's the best way to do this?

in each tile there is only object (I mean objects can not stack on top of each other). and we access to both map of Objects and Objects have their own position. 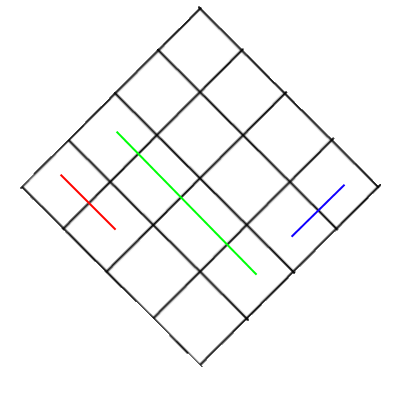 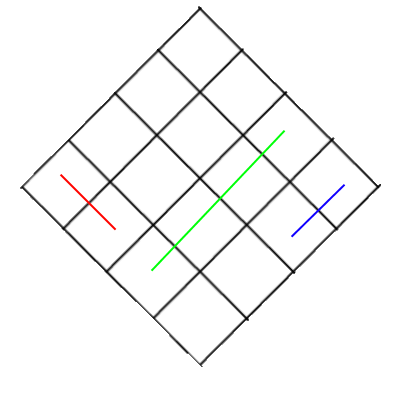 in first one first blue object should be drawn then green then red. while in second one you have to draw them in reverse order. you need to draw red first and then green and finally blue object. as you can see there is no difference in position of blue and red objects ,they both have different distance from camera and so on. but because of their relative position to green box, you need to change their draw order between two images. that's what makes this problem a mess.

side-note: since all objects are rectangular prism, it's mathematically provable that there is at-least one draw order to satisfy problem needs.

This is actually very simple if your objects match up with your isometric tiles. Take a look at this image: 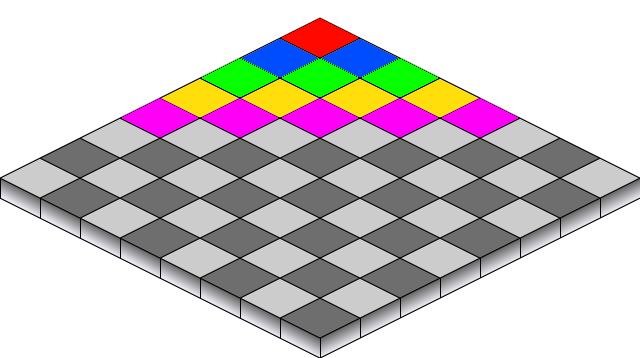 You should first draw the object at the red position, then objects at blue, then green, then yellow, then magenta, and so on... It should be fairly obvious how to implement this if your board has objects in it instead of objects having position as an attribute. If that's not your case, you should keep a separate data structure, updating it whenever an object moves (which should be fairly easy too.)

This has a new problem: you can easily see how now its complexity is O(N) where N is your board size (N=W*H). To overcome this problem just create a new linear data structure where each index in your structure matches a given depth, updating it whenever an object changes depth.

The case where an object doesn't match with a single tile is a bit harder, so I will post it if you need it as soon as you update your question.

I have no special knowledge on this subject, but here's a thought.

Start by marking each cell as "not drawn". (Or, equivalently, use an array to represent the location of the closest "drawn" thing on each "near-far line" of cells, or a set, etc.) Then, for each cell (I would probably go through them in the order kaoD described): check whether that cell has been drawn; if it has not been drawn and contains an object, check whether each cell that would be obscured by that object has been drawn, and if not draw it recursively; draw the object contained by that cell if necessary; and mark that cell and any cells occupied by its object as "drawn".

I'm assuming that you can quickly map a cell to the object inside it, if any. I believe this is O(n) time, though it could end up building a large stack (which you may want to turn into a linked list if you're worried about running out of stack space).

I'd use the painter's algorithm with a taxicab distance from the furthest cell away from the camera, drawing the ones closest to the camera first and then moving outward.

Edit: This doesn't work unless you can draw the contents of each cell individually.

What makes you believe it's “mathematically provable that there is at-least one draw order to satisfy problem needs”? Here is a trivial counterexample where you cannot rely on z-sorting objects: 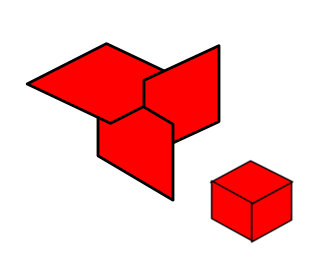 Not the answer you're looking for? Browse other questions tagged algorithm flash isometric draw-order .

21
How do I sort isometric sprites into the correct order?
2
Is it possible to create a homemade depth buffer?
0
Orthographic camera and z-axis in 3D isometric view game

9
Creating A Board Game AI
21
How do I sort isometric sprites into the correct order?
3
3-in-a-row or more logic
1
How do I use tiles and sprites together in an isometric scene?
3
How to calculate whether a cuboids face edge is infront of or behind another for sorting
6
How do I determine the draw order of isometric 2D objects occupying multiple tiles?
4
Navigate multiple Units on a grid through a tight space with different directions
1
How do I order sprites by depth in Java, when their objects are of different classes?