I've been trying to implement shadows in my game and I've been following quite a few tutorials online, mainly Riemers, but I'm always getting the same 2 errors when I'm drawing my models and setting the parameters from the effect file. The errors are:

This method does not accept null for this parameter. Parameter name: value

Object reference not set to an instance of an object.

So I've then downloaded a sample and just replaced my model with the one found in the sample and the same errors occur. I this find very strange as it works with his model. I'm wondering if the problem is with my models (I made them myself). The errors start to occur after the second foreach loop.

Any help would be greatly appreciated, thanks.

I had a hunch, which I've explained in the comments but I'm pretty certain I've figured it out.

The ShadowMappingExample uses a custom pipeline to add the ShadowMap effect to all the models. This way you can access the shadowmapping shader via

You have let Visual Studio know that you want your own models to be imported using the ShadowMappingExample pipeline and not using the default model pipeline that just applies BasicEffect as shader.

To do this set ContentProcessor to CustomEffectModelProcessor instead of just Model.

Here's a screenshot, it should be in the lower right corner of Visual Studio when you've selected your model. 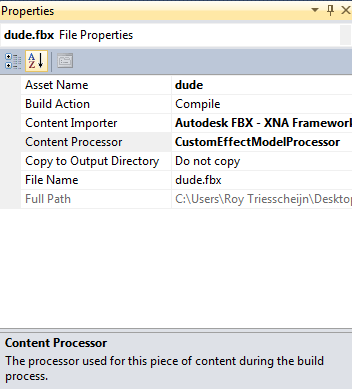 Now to explain why you got the null reference error: this happens because the default processor applies the BasicEffect shader, which doesn't have the technique which you are trying to set as active.

Hope this explains everything.

Not the answer you're looking for? Browse other questions tagged xna shaders hlsl shadows .

10
Shadow Mapping and Transparent Quads
1
Converting a DrawModel() using BasicEffect to one using Effect
2
Omni-directional shadow mapping
1
multipass shadow mapping renderer in XNA
0
OpenGL GLSL ES 3.10 - Referencing a uniform variable, causes the vertex shader to not draw anything
1
Why is my tessellation output failing to reach my geometry shader?